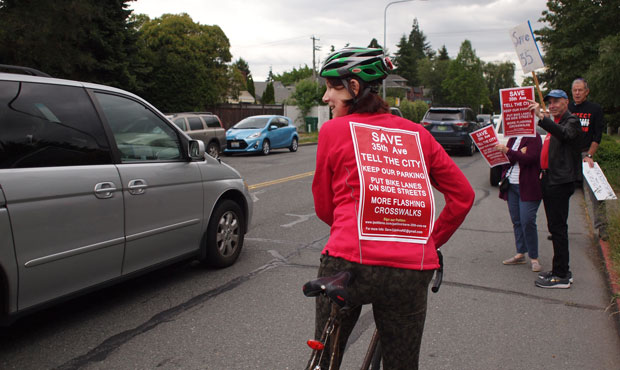 Seattle Councilmember Rob Johnson believes it’s his “moral imperative” to install bike lanes, even if it goes against the wishes of a huge portion of his constituency.

He may lose his seat over this decision.

There has been a long battle between community members and Johnson. Save 35th Ave NE Coalition is a large group of citizen activists – that actually live in the district – trying to save a stretch of parking vital to local small businesses. Johnson has been fighting behind the scenes to install bike lanes in the thriving neighborhood, though the project was originally presented simply as a “paving plan.” The plan garnered a 68 percent negative reaction from the community, per city-documents, when public input was sought.

More troubling is an allegation that Johnson’s office has been working to elevate one group, Safe 35th, because they’re in favor of the bike lanes. Johnson, while denying the charge, is choosing to leave significant questions unanswered.

Johnson’s office met with Safe 35th in February to discuss a pro-bike lane strategy. According to an email, Geri Morris, a legislative aide to Johnson, wrote notes to herself outlining what Safe 35th would need to do in order to successfully lobby for the bike lane project.

The notes indicate bike lane proponents should or would “Be vocal – audience is Mayors [sic] office at this point,” and that they should or would plan a “Family bike parade to businesses” while getting a local reporter, by name, to cover it. “we [sic] are your neighbors and customers,” the email states. You can read it in full here.

Safe 35th is a community organization; it was not created by CM Johnson’s office. Like many community groups, they reached out to Council and had discussions with the Councilmember and his staff about their goals and objectives. Councilmember Johnson and his staff regularly meet with constituents and community organizations representing a variety of viewpoints. The email referenced was a staff member emailing notes to herself about the project.

And does Johnson and his staff “regularly meet” with folks from a variety of viewpoints? Gabe Galanda, a local attorney behind Save 35th, doesn’t buy it. And after an initial meeting, Save 35th activists have had a hard time getting responses from Johnson.

“Rob Johnson does not consider ‘a variety of viewpoints,’” Galanda tells the Jason Rantz Show on KTTH. “He’s an ideologue who considers only viewpoints like his own. At this point, only Mayor Durkan can honor the viewpoint of 4,100 taxpaying constituents, 50 local businesses, and five community councils. Rob Johnson simply refuses to.”

Galanda met with Johnson in February. While Galanda spent more than 25 minutes with Johnson, he felt the councilmember “…proceeded to dismiss our concerns out of hand…”

On Aug. 7, after weeks of pressure, Johnson finally reached out to critics of the bike lane proposal with a lengthy statement to justify his position. Johnson again denied coordinating with Safe 35th, before highlighting his thoughts on why he’s a supporter of the bike lane project.

Johnson argues that bike lanes lead to safer streets and that “[s]afe streets are critical for equity.”

“Low-income people and people of color are less likely to own a vehicle, making them more dependent on transit, walking and biking and disproportionately likely to be killed in a collision,” Johnson argues.

This data, as it turns out, is irrelevant to this region. Seattle already leads the nation in decreasing car ownership, per the US Census, outlined in The Seattle Times. And the data Johnson uses to support his claim comes from a Governor’s Highway Safety Association study. Washington data was not part of the study. Indeed, California, Florida, Texas, New York and Arizona accounted for 43% of the pedestrian deaths. Some of the reasons cited as a possibility for the high numbers is that pedestrians are fixated on their phones, and not paying attention to traffic, and pedestrian intoxication. Another reason we’ve seen this kind of data? Streets without sidewalks or adequate lighting. If Johnson wants to turn this into a social justice cause, perhaps he can work on installing more street lamps. And if he wants to make the case that people of color in his district are disproportionately likely to be killed, he should cite data from his district (or even this state).

Critics of the bike plan advocated they could move the project one block away, to 36th, which is safer and more accommodating to cyclists. This would allow them to maintain parking on 35th. That would never happen, of course. The very goal of this project is to get rid of the parking spots and encourage less people to drive.

“I am particularly mindful today, as we experience another record-setting summer, that we have a moral imperative to decrease our carbon emissions that are causing climate change,” Johnson writes. “Transportation is Seattle’s largest producer of carbon emissions and we can reduce these impacts by shifting some of our car trips to walking, biking or transit, but only if we invest in making those choices safe, direct and convenient.“

This position should not come as a surprise to those familiar with Johnson, formerly of the Transportation Choices Coalition — an anti-car, pro-bike lane non-profit.

Galanda is not pleased, saying Johnson is “…completely forsaking the neighborhoods who elected him to public office.”

With animus toward the council on the rise due to their mishandling of the head tax, this may be the hyperlocal issue that will end Johnson’s chances at another term.

With minimal travel time required and every activity under the sun, Anacortes is the perfect vacation spot for all ages.
Close
Seattle councilmember claims ‘moral imperative’ to kill parking