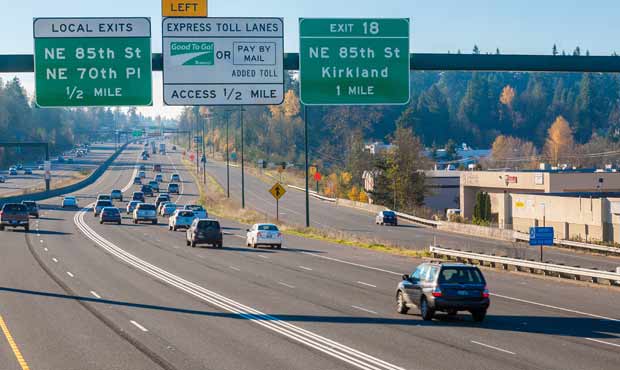 Those who aren’t fans of the I-405 toll lanes are not in luck — a current bill in the Legislature would see them here to stay.

Senate Bill 5825, sponsored by Sen. Steve Hobbs (D-Lake Stevens), chair of the Senate Transportation Committee, would permanently keep the 405 toll lanes — and expand them from Bellevue to Renton — as well as the toll lanes on State Routes 167 and 509.

When tolling originally began in September 2015, the state had two requirements: that the tolls would make enough to cover operating expenses and that they would operate at a minimum speed of 45 miles per hour 90 percent of the time.

“If DOT was unable to meet both of those requirements, the toll lanes, they promised, would be terminated,” Washington Policy Center Coles Center for Transportation Director Mariya Frost told the Dori Monson Show.

RELATED: WSDOT apologizes for ‘U SUCK,’ but not for illegal, expanding toll lanes

The toll lanes have certainly brought in more than they cost at $75 million over three years, but aren’t doing as well to meet the second goal. Instead of operating at 45 miles per hour 90 percent of the time, they are “operating on average at that speed 81 percent” of the time, Frost said.

“I don’t view the toll lanes as a success … I think it’s wildly inaccurate to say that they are a success,” she said.

WSDOT got its statistics by averaging the speed of toll lane drivers over the four busiest hours of the day. However, Frost said that it should have measured speed during the single peak hour, which is far and away the most congested time period.

During that one hour, “those lanes are failing even worse than that average over the larger period,” Frost said. Averaging the speeds over the full four hours makes it seem like traffic moves faster than it actually does during that peak hour.

However, WSDOT did measure the HOV lanes’ speed at the peak hour, Frost noted.

“The data is rigged, so to speak, to show the HOV lanes failing even worse to then make a case to turn those lanes into express toll lanes as well,” she said.

If the Senate bill passes, it may not matter anymore if the toll lanes operate at 45 miles per hour 90 percent of the time; Frost said that Sen. Hobbs struck the sentence in the current law mandating the 45-mile-per-hour speed, replacing it with “the most efficient movement of traffic.”

“That is an incredibly subjective way to interpret speed,” she said. “Who determines what is an efficient movement of travel?”

Further down on the same page, the bill states that the following performance measure shall be monitored (with new language in italics):

Whether the express toll lanes maintain speeds of forty-five miles per hour at least ninety percent of the time during peak periods, or an alternate metric determined by the department in conjunction with the federal highway administration [sic]

This added language, Frost said, gives WSDOT an easy way to get out of the original speed obligation.

“By making it optional, they nullify it,” Frost said. “A requirement that’s optional is not a requirement.”

If legislators are going to all the trouble to write the new language about speed requirements in the law, Frost said, then WSDOT must realize that it is currently failing the speed requirement, and therefore operating the 405 toll lanes illegally.

“What’s really amazing, and rather suspicious, about whole thing is … If they’re really secure with the interpretation of the law, then why are they taking it to this length to eradicate it from the RCW?” she asked.

“What that tells me is that they want to spend that money for other things, like transit improvements,” she said. “It’s a terrible policy, it breaks a major promise to the public.”

Frost does not see this process helping politicians if they do indeed have a goal of establishing more toll lanes around the entirety of Washington.

“If the intent of lawmakers is to expand tolling throughout the state, then doing it so dishonestly sets a terrible precedent,” she said.