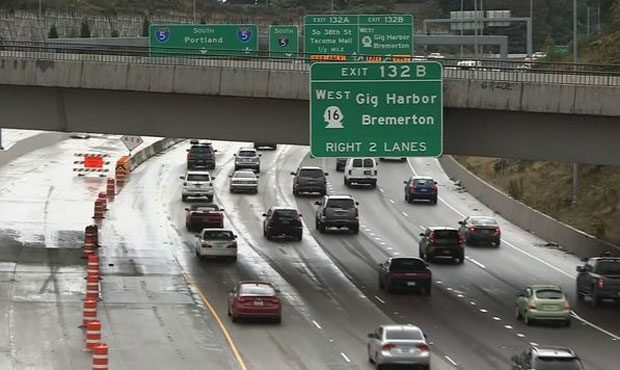 There will be six more weeks of lane closures near the Tacoma Mall and it’s bad news for South Sound drivers.

The Washington State Department of Transportation insists the end is near to the year’s long construction.

The stretch of southbound I-5 at the State Route 16 interchange involves fully installing HOV lanes. That stretch has given drivers headaches for years, testing their patience.

KIRO 7 asked regular commuter Kait Sibley what she thought of the construction work that’s been happening.

“I think it’s not doing any good. It’s clogging up the traffic,” Sibley said.

She said it’s been a mess even when she goes to work on the weekends.

“I sometimes get off on the downtown Tacoma exit just to avoid the freeway traffic because it’s so clogged up.”

Officials said the next six weeks of work are the beginning of the end.

Adamson told KIRO 7 over the phone that crews will be mostly putting the finishing touches on the HOV interchange onto SR 16, and it will necessitate closing one southbound I-5 lane.

“And while that lane is closed, our crews working for WSDOT will have overhead work. And you just can’t do that kind of work — putting in these large signs that come out over the lane — you can’t have that ongoing while people are driving through the area,” Adamson said.

Workers are expected to finish up paving and striping work, too, over those six weeks.

Sibley said she will believe it when she sees it.

KIRO 7 asked Sibley this: “You don’t believe them when that they say it’s going to go away?”

“No, not necessarily, I don’t! I mean, we’ve lived here all our lives. I was born in Tacoma,” Sibley said.

The only bad news in all the construction work that is supposed to happen is the weather. It must be good for the work to be done.

A lot of rain could delay the work. And just as work is done in one place, it revs up someplace else.