The behavior is unanimous: Reporters and editors at Washington state news organizations have done their best to ignore the radical sex-ed bill from Democrats and Planned Parenthood.

When they must write a small piece about, they refuse to cover the most controversial aspect of the most divisive, debated, and consequential legislation in the state: The obscene curriculum and the indisputable propaganda it teaches that is directly at odds with material, scientific fact.

Did these media companies collaborate their non-coverage? Do they refuse to cover it for fear of being called transphobic, homophobic, or some other phobia because the curricula promotes every talking point of the Sexual Left? Whatever the excuse, by choosing to hide the curricula from you, the Washington state news media is now officially less trustworthy than Facebook pages run by mothers and grandmothers.

The comprehensive sex education compliant curricula, the very curricula framework Chris Reykdal, the head of government schools, demands every school adopt, is easy to access, as mothers and grandmothers have proven. Here are some examples.

Pornography as a teaching aid?

Why? Follow the money right to Planned Parenthood, who wants more abortions, which will absolutely follow more teen sex. Your news media hid this from you while a mother found it in Laurie Dills newsletter. 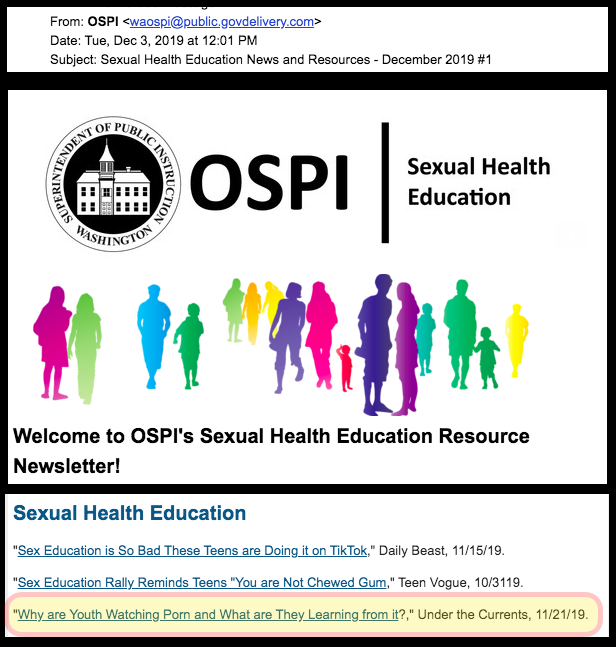 Though you would not know it from Washington state news media, the Democrats in Olympia actually vetoed an amendment that would require teachers who use pornography in their classrooms to talk about the negative effects.

Purposefully confusing children about their sex

Your second grade children will be taught that “some people have ‘three holes’ between their legs, some people have two.” The removal of the words “men” and “women” and “girls” and “boys” is planned and purposeful.

The curricula will teach your older children that doctors have no way of knowing if a baby is male or female. It’s an utter mystery until the child announces their sex (do you notice it’s no longer “gender”? The Sexual Left have moved the ball, so that now, your children will be taught their feelings change their biologically unchangeable).

This stands in direct opposition to material, scientific fact: Our DNA, chromosomes and genes — which determine our sex — are inconvenient facts in the face of Planned Parenthood’s desire to build a massive revenue base shoving cross-sex hormones into kids they have caused great pain, grief and worry by confusing them about their sex.

Mothers and grandmothers show you this curricula that the news media hides (warning: that link contains images that your nine-year-olds will be shown, that we cannot show on this website!)

Your children will be taught that they cannot trust you — their parents — if you are Christian or conservative (never mind that Muslims and observant Jews share many of the same teachings about sexual modesty). Grandmas and mothers found this in the curricula your news media decided to hide from you. This piece of the 3Rs curriculum is directed at 13-years olds.

More use of pornography — your children will be looking at Penthouse and Playboy with their teachers.

Preparing for Highschool and College by learning about sexual “Blood Play,” “Fluid Play,” and more.

The entire Washington state news media has hidden this from you — but why?

On Wednesday in Olympia, a crowd that the Washington State Patrol estimated to be 3,000 people, protested the curricula tied to the sex-ed bill, and the refusal of Democrats to listen to the vast majority of parents who stand in clear opposition.

The same local media that spent three weeks covering a protest of dozens of students at Kennedy High School, the same Washington state media that featured the protests of Greta Thunberg, has studiously avoided a mention of this protest.

When the Washington state news media has been forced by public pressure to write something about the sex-ed bill, they have colored it with the cliche of “Democrats say and Republicans say.”

In presenting the parental concerns about the bill, reporters have written that parents contend some of the curricula is not age appropriate. You have now seen 100% more of the curricula than the media has ever shared with you (and none of the graphic material).

The fact that this curricula, 3Rs, and FLASH, both Comprehensive Sex Education compliant, which matches the sex-ed Bill requirements, are readily available to activists, mothers, grandmothers, and fathers, means the Washington state news media has made the active decision to hide them from you.

I challenge anyone in the news business in Washington state to defend their Propaganda of Silence they have all practiced in regard to the curricula pre-approved by your state’s education boss and about to be made law by Jay Inslee.

Maybe Mr. Frank Blethen, perhaps the patriarch of Seattle news media, will explain his paper’s decision and tell us whether there was an agreement to coordinate the non-coverage of the sex-ed bill.

There are a wide variety of treatments options available for men with prostate cancer. One of the most technologically advanced treatment options in the Pacific Northwest is Stereotactic Body Radiation Therapy using the CyberKnife platform at Swedish Medical Center.
Close
Conspiracy of Silence: the Washington State News Media and Compelled Sex-Ed