Nothing but purple at Seattle’s The Purple Store 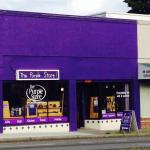 Have you ever wondered what it would be like if you followed through on that crazy idea?

Adam Sheridan, owner of The Purple Store in Seattle, did and now he’s shipping thousands of everyday items, in the color purple, to fans across the country.

It might seem an odd business choice, but Sheridan said he simply saw a void and filled it.

“People who like purple really like purple and in a perfect world, something fun like The Purple Store should exist,” he said. “We have found that you have an enthusiastic fan who might see a little bit of purple in a department store, but when they come here, their eyes light up and their jaws drop.”

The Purple Store, online and located on Aurora near Greenlake, started off in a Fremont apartment and several storage units before moving to its current home four years ago. Now, with a relatively fresh coat of purple paint, the store is celebrating its 10th anniversary.

Sheridan said, in the beginning, they didn’t advertise that they were based in Seattle because there was no brick-and-mortar store.

“The reason we set up the retail store was because people kept saying that they wanted to come to Seattle to come to The Purple Store.”

Now he said he sees people from all over the world stopping in to pick up a purple apron or men’s purple dress shirt, which is one of the most popular items at the store.

“People often expect us to have wacky, crazy, strange things,” Sheridan said. “What we found is what our customers want is ordinary everyday item, but in purple. One of our rules is, if we don’t love it, we don’t carry it.”

And business is good. The store survived the recession and Sheridan said with more fans of people discovering The Purple Store everyday, they have plans to add products and locations.

Sheridan himself isn’t necessarily a huge purple fan, but he does wear the regal color quite often and he appreciates it. Mostly, he loves that his store makes people happy.

“I started the business because I knew enough people who love purple and I knew that people will get excited about something that fits their needs or passion.”

Being able to track down a purple item for a rabid fan also excites Sheridan. If he can’t find it, he simply has it made. The store is about to receive its sixth batch of purple tea kettles specially made after enough customers expressed interest.

The Purple Store also made sure there is a purple Calvin Klein shirt and purple Le Creuset dishware.

Sheridan said his next big quest is for some good quality purple pants for both men and women.

“It sounds so unexciting, but people want your basic work pants and that’s one thing we’re really looking for.”

While Sheridan, like other business owners, puts in long hours, shipping pallets of purple camouflage clothing to an LA Fitness in London, and hundreds of purple stemware to an oil executive’s Texas party, he says it’s worth it. Plus, there’s the endless stories and jokes.

“Of course, we have people walk in the door and ask if we have anything green or blue.”

Seattle Public Schools just announced a three-year contract with a brand-new company to the Pacific Northwest to assist with their student transportation: Zum.
Close
Nothing but purple at Seattle’s The Purple Store