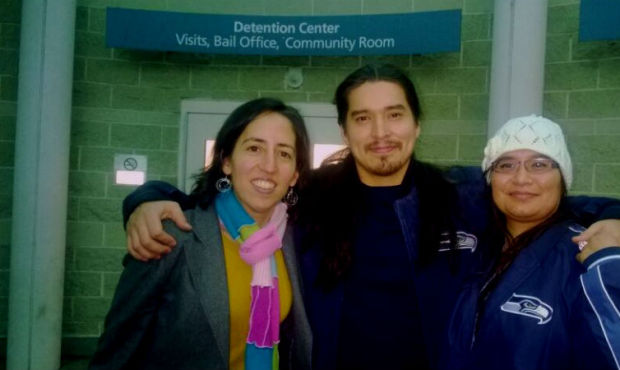 A Seattle-area man will spend his first Christmas in more than a decade with his family after the Innocence Project Northwest convinced King County prosecutors to take a new look at his conviction for robbery and burglary.

Brandon Olebar, 30, was convicted and sentenced to 16 1/2 years in prison for his alleged role in the vicious 2003 beating and robbery of his sister’s boyfriend.

The victim had told police six to eight people broke into his home, pistol whipped him and beat him unconscious. He said the attackers had feather facial tattoos. Two days later, he identified Olebar in a photo montage.

Olebar does not have such a tattoo and had an alibi. But a jury convicted him anyway based solely on the victim’s identification.

The University of Washington-based Innocence Project Northwest began looking into the case in 2011. Several law school students uncovered new evidence including statements from several of the attackers who admitted to the crime and confirmed Olebar was not present.

Rather than pushing for a new trial, the Innocence Project brought the case to King County Prosecutors, who launched an investigation of their own.

“A prosecutor has an on-going duty to receive and consider new evidence in a case, even after a jury’s verdict,” King County Prosecutor Dan Satterberg tells KIRO Radio. “The new statements from the participants in the robbery cast enough doubts about Mr. Olebar’s involvement in the crime that we decided the case should be dismissed in the interests of justice.”

Satterberg’s office asked a judge to vacate the conviction and release Olebar. He was granted his freedom and walked out of jail last Friday.

“I was ecstatic to finally be heard when the Innocence Project Northwest took my case. My wife, the students and my lawyer fought for me and it means so much that they did that for me,” he said in a statement.

Olebar spent years protesting his conviction and said he was “ecstatic to finally be heard” when the IPNW took his case. “It’s unreal. The people that believed in me when I was in prison kept me going.”

Snohomish Health District SPONSORED — Cheers to the parents and guardians who keep their kids safe and healthy. The dad who cooks a meal with something green in it, even though he’s tired and drive-thru burgers were tempting. The mom who calms down the little one who loudly and resolutely does NOT want to brush […]
Close
Wrongfully convicted Seattle man wins release from prison just before Christmas