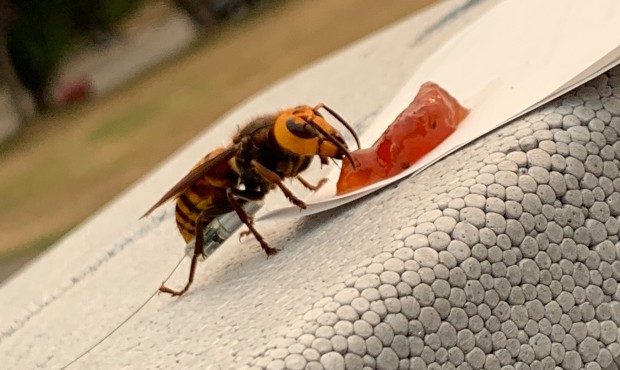 The chase is on. Once again, the Washington State Department of Agriculture has begun the process of tagging and tracking Asian giant hornets in the hopes of finding their nest.

On Friday, scientists with the department attached radio trackers to a captured hornet, then released it. The hope is that the tracking device can lead the entomologists to a nest; as soon as that happens, they will start working to eradicate the nest.

“We’re setting out live traps, and hoping to catch live ones, tag them, and track them back to the nest like we did last year,” Karla Salp, communications specialist for the department, told KIRO Radio.

Last year’s tracking effort paid off, when the department discovered and destroyed an Asian giant hornet nest in October near Blaine. Salp said that they believe there is another nest in the same area, especially after a resident took a photo last week of an Asian giant hornet attacking a paper wasp nest just a couple of miles from where the previous nest had been.

Entomologists had tagged a second hornet on Friday, but that tracker has since fallen off.

UPDATE: On Saturday our team was able to recover one of the radio trackers, unfortunately without an #AsianGiantHornet attached to it. We continue to search for the second hornet.

However, the department noted that the tracker on the other hornet, which is presumably still attached, should last for a couple of weeks.

Salp said that this is the time of year that worker hornets start emerging, so she expects to see more in the coming weeks — and each of those is a potential new opportunity for tracking.

Washingtonians, especially those living in Whatcom and Skagit Counties, are encouraged to help the hornet-spotting effort by making DIY Asian giant hornet traps.

“It’s not too late — you can still participate and put a trap up,” Salp said.

Instructions can be found on the Department of Agriculture’s website.

With minimal travel time required and every activity under the sun, Anacortes is the perfect vacation spot for all ages.
Close
Washington Department of Agriculture begins Asian giant hornet tracking effort