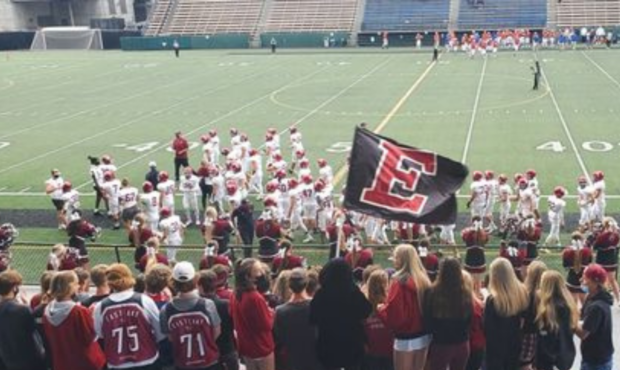 Eastlake High School staff canceled a Patriot's Day theme to honor victims of 9/11 because someone could be offended by red, white, and blue clothing. (Photo: listener submitted)

Students of a local high school were ready to wear red, white, and blue to honor the lives lost on Sept. 11. But school staff pulled the plug, concerned the expression could be racially insensitive and offend some people.

At Eastlake High School in Sammamish, student leadership promoted a Patriot’s Day theme at a football game at Memorial Stadium against Rainier Beach. The game was previously canceled, then rescheduled to the day before the 20th anniversary of the terrorist attacks. Students wanted to do something to remember the tragic events. But staff intervened.

According to an email obtained by the Jason Rantz Show on KTTH, the principal said wearing those colors could “unintentionally cause offense to some who see it differently.” Students are upset. And some parents now speculate school officials thought their majority-minority opponents would be offended by American pride.

Eastlake High School in Sammamish WA canceled a theme to honor 9/11 victims because some could be offended by wearing red, white, and blue. I broke down the exclusive on @Varneyco on @FoxBusiness. pic.twitter.com/MeJRZa8djd

Eastlake High School students were not yet born when terrorists brought down the World Trade Center in New York City, attacked the Pentagon, and brought down United Flight 93 in Shanksville, Pennsylvania. But their lives — and the lives of every American — were changed forever.

Having a sense of history sometimes lost on young Americans, there was a student-led movement to honor those lost during the worst terrorist attack in history. Students would show their pride by wearing red, white, and blue clothing.

But the themed event was canceled by Eastlake staff at the last minute. Students learned of the decision Friday morning during announcements.

“At this point, I was fairly upset and confused as to why the theme was changed so I went around asking students in our leadership,” one student told the Jason Rantz Show on KTTH. “They had explained that red, white, and blue was going to be seen as racially insensitive and may affect people in a way that we will not understand and for that reason that we were to change our theme.”

One mother emailed Principal Chris Bede to ask what happened. She was shocked by the response.

“Our leadership teachers made this decision and explained it to students,” Bede wrote. “I know tomorrow is 9/11 and understand the sacrifice and values our flag represents, but I think they just did not want to unintentionally cause offense to some who see it differently.”

Associate Principal Darcie Breynaert shared the same statement with another parent who demanded an explanation.

Neither Principal Bede nor district communications director Shannon Parthemer explained who would take offense. And why is wearing red, white, and blue offensive to begin with? No one would say.

But to some, the implication is that either the Rainier Beach High School team or their fans wouldn’t have context as to why the colors were worn. That could somehow offend them.

“Since it was not a home game, there was no opportunity to have an announcement about Patriot’s Day and to share why students were dressed in red, white, and blue,” Parthemer explained in a statement to the Jason Rantz Show on KTTH.

There were, of course, plenty of opportunities to make announcements. They could have informed the school ahead of the game or made an announcement at the stadium. According to a photo shared with the Jason Rantz Show on KTTH, the Rainier Beach team didn’t have many fans in the stands anyway.

Parthemer tells the Jason Rantz Show on KTTH that there is no implication towards the opposing team. She points to one unnamed staff member as responsible for the decision to cancel the theme.

“We have followed up with the staff member on decision making processes,” Parthemer said.

She did not, however, detail why the decision was upheld. Indeed, both the principal and associate principal used the same coordinated language to explain the decision before the game even took place.

Emails reviewed by the Jason Rantz Show on KTTH show Bede seemingly taken by surprise by the decision to cancel the theme. It was made by a different staffer. But the announcement went to students Friday morning.

“I understand your perspective and was not looped into this conversation until an hour ago,” he tells a parent. “I do want to clarify that schools do not have a right to ban students from wearing anything as long as it is not lewd, vulgar, etc. And the theme of red, white, and blue definitely would not fit into that category.”

In other words, it’s the school’s theme that was canceled. Students could wear what they want, if they so choose.

Students were very unhappy with the decision

Eastlake students were not pleased and let various staff members know it. Several students reached out to the Jason Rantz Show on KTTH.

Ryan Ware is the Eastlake senior class president and member of the football team. He said students were eager to wear red, white, and blue clothes and were disappointed by the school administration’s decision.

“We disagreed and were extremely disappointed. I couldn’t believe their reasoning,” Ware explained to the Jason Rantz Show on KTTH.

One other student noted the hypocrisy on display. The school is about inclusivity — just not when it comes to representing the country?

“I was instantly upset, and frustrated,” one student emailed. “If Eastlake is all about including everyone’s beliefs and being together as a ‘family,’ then why are we being told we can’t represent the country we live in? I have seen other [Lake Washington School District] football teams that held a flag or did some sort of memorial recognition towards 9/11, but apparently we weren’t allowed to even wear USA colors.”

Another student told me he was eager to participate and show his pride in this country and pay his respects. But when he learned of the decision, he stayed home.

“I was fairly upset and ended up not attending the game. … [It] was really kind of [confusing] as to why the topic was so controversial that we couldn’t wear that clothing,” the student said.

Parents are outraged and call out presumptions

The parent sharing her exchange with Principal Bede told me she was “stunned” by the decision.

“There is always the potential that someone may be offended by something but this decision baffles me,” she wrote. “I would argue that many more people are offended by the decision to ban the theme of wearing red, white and blue. If there is one thing that has the potential to unite us all, it’s that we are Americans.”

That mother is not alone. On a Facebook page for Eastlake High School parents, several expressed outrage and concern over the move. Some speculated over the intent.

“The leadership and equity team decided that since it was against a predominantly Black team they did not want to ‘unintentionally cause offense to some who see (our flag) differently,'” one parent speculated.

Another parent responded to the speculation, calling out the school’s possible motive.

“Sounds presumptive and condescending to me — in fact, probably racist,” the parent said.

The superintendent of the Lake Washington School District released a statement: The Principal emailed the school community today to offer an update on the situation.