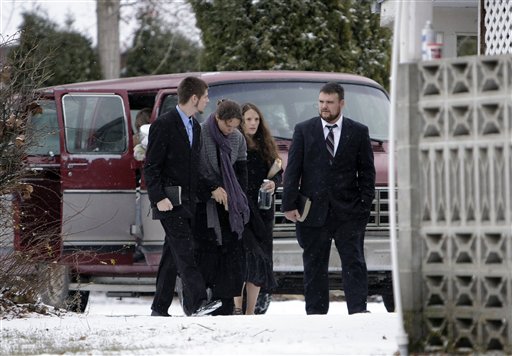 The family of confessed serial killer Israel Keyes held a funeral Sunday remembering him in a small Washington town.

“He is not in a better place. He’s in a place of eternal torment,” said Jake Gardner, the pastor for Israel Keyes’s family, before the funeral in Deer Park, Wash., a town about 15 miles north of Spokane.

The 34-year-old Keyes confessed to killing eight people across the country before he committed suicide recently in a jail cell in Anchorage, Alaska. The FBI and Anchorage police now say they believe he may have had three additional victims. Authorities in Oregon are also investigating whether Keyes also had murder victims there.

Keyes slit his wrist and strangled himself with bedding and was found dead last Sunday. He was facing federal murder charges in the kidnapping and death of 18-year-old Samantha Koenig, who was abducted from an Anchorage coffee stand on Feb. 1.

On Sunday, his funeral was attended by his mother, Heidi, and four of his sisters. The family did not make a statement to the press.

Gardner said the family decided to hold the funeral in Deer Park because it was a convenient location in case any of his acquaintances wanted to attend. Keyes grew up in the nearby town of Colville in Stevens County, a remote corner of Washington state.

On Sunday, there was no indication of any other attendees besides family, who mostly live in Texas.

“Israel rejected the gospel and thus the outcome of his life is this tragic story,” said Gardner of the Church of Wells in Wells, Texas.

Shortly before his arrest in March, Keyes attended a sister’s wedding in Texas, where he ranted in mid-ceremony about how he didn’t believe in God, Gardner said.

Gardner said Keyes will be buried later at an undisclosed location in Washington.

Law enforcement officers in Anchorage conducted up to 40 hours of interviews with Keyes after his March arrest in Texas. During that time, Keyes confessed to killing Koenig, Bill and Lorraine Currier in Vermont and five other people, although details about those victims were sparse.

Investigators said Keyes told them he enjoyed killing people and seeing coverage of his crimes in the media.

Keyes told investigators the first violent crime he committed was a sexual assault in Oregon between 1996 and 1998 in which he let the victim go. The FBI is seeking more information on that crime.

Of the five other murders Keyes confessed to, four were in Washington state and one on the East Coast, with the body disposed of in New York. Law enforcement officers are combing through unsolved homicide files trying to learn who Keyes killed, because he provided little information on those cases.

Authorities in the Spokane and Colville areas have said it’s unlikely that Keyes was responsible for any of the unsolved homicides on their books.

There are a wide variety of treatment options available for men with prostate cancer. The most technologically advanced treatment option in the Northwest is Stereotactic Body Radiation Therapy using the CyberKnife platform.
Close
Family of confessed serial killer Israel Keyes holds funeral in Washington state