Willard Noble Chaiden Miller and his attorney Christine Branstad attend a bond review hearing at the Jefferson County Courthouse in Fairfield, Iowa, Tuesday, Nov. 23, 2021. Jeremy Everett Goodale and Willard Noble Chaiden Miller, two southeast Iowa teenagers charged with first-degree murder and conspiracy to commit murder in the death of their high school Spanish teacher, asked a state court judge Tuesday to lower their bond so they could be released from jail, while prosecutors asked it be maintained at $1 million or even raised to $2 million. (Zach Boyden-Holmes/The Des Moines Register via AP)

FAIRFIELD, Iowa (AP) — Two southeastern Iowa teenagers pleaded not guilty Monday to killing their high school Spanish teacher, whose body was found earlier this month in a park where she took daily walks.

Willard Noble Chaiden Miller and Jeremy Everett Goodale, both 16, are charged with first-degree murder and conspiracy to commit murder in the killing Nohema Graber in Fairfield. Graber, 66, was reported missing Nov. 2 and her remains were found later that day in the local park. Authorities said she suffered “inflicted trauma to the head.”

Authorities haven’t disclosed a possible motive for the killing.

Miller and Goodale, who are being held in juvenile detention centers, entered their pleas in arraignment documents filed with the court Monday. They waived their right to a speedy trial, meaning prosecutors wouldn’t have to try them within 90 days of them being charged, and Judge Joel Yates scheduled the trial to begin April 19. He told lawyers to plan on a pretrial conference on March 21 to discuss issues involving evidence, trial length and jury selection method.

Last week, the teens’ lawyers asked Yates to lower their bond so they could be released to their parents’ supervision, saying they had no way to flee prosecution. Miller’s attorney, Christine Branstad, said research shows that detaining juveniles away from family for prolonged periods before trial can have a detrimental effect on them and stunt their development.

Prosecutors, though, called for the bonds to be kept at $1 million or even raised to $2 million. Assistant Iowa Attorney General Scott Brown said the “extremely brutal murder of an innocent person” justified keeping them the defendants in custody.

Yates indicated he would rule on the bond issue this week. 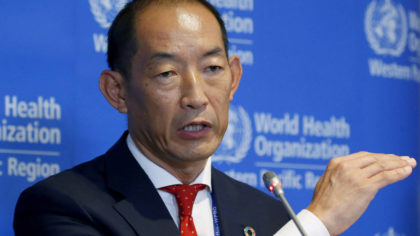 Japan to watch WHO probe of director’s alleged racism, abuse

TOKYO (AP) — Japan’s government said Friday it will watch the World Health Organization’s investigation into staff complaints over racism and abuse by a top Japanese official at the agency but denied it inappropriately received sensitive vaccine information from him. WHO staffers have alleged that Dr. Takeshi Kasai, the U.N. health agency’s top director in […] LISBON, Portugal (AP) — Filipe Orfao, a 37-year-old emergency room nurse in Lisbon, voices grievances that have long been heard in Portugal. The familiar gripes include a tradition of low pay, a public service career structure that thwarts ambitions to get ahead in life, the nagging enticement of going to work abroad instead of staying […] NEW DELHI (AP) — Google will invest up to $1 billion in partnership with India’s Airtel to provide affordable access to smartphones to over a billion Indians and speed up use of cloud-based computing for business, the two companies said on Friday. The investment will help India’s small businesses adopt digital tools as India works […]