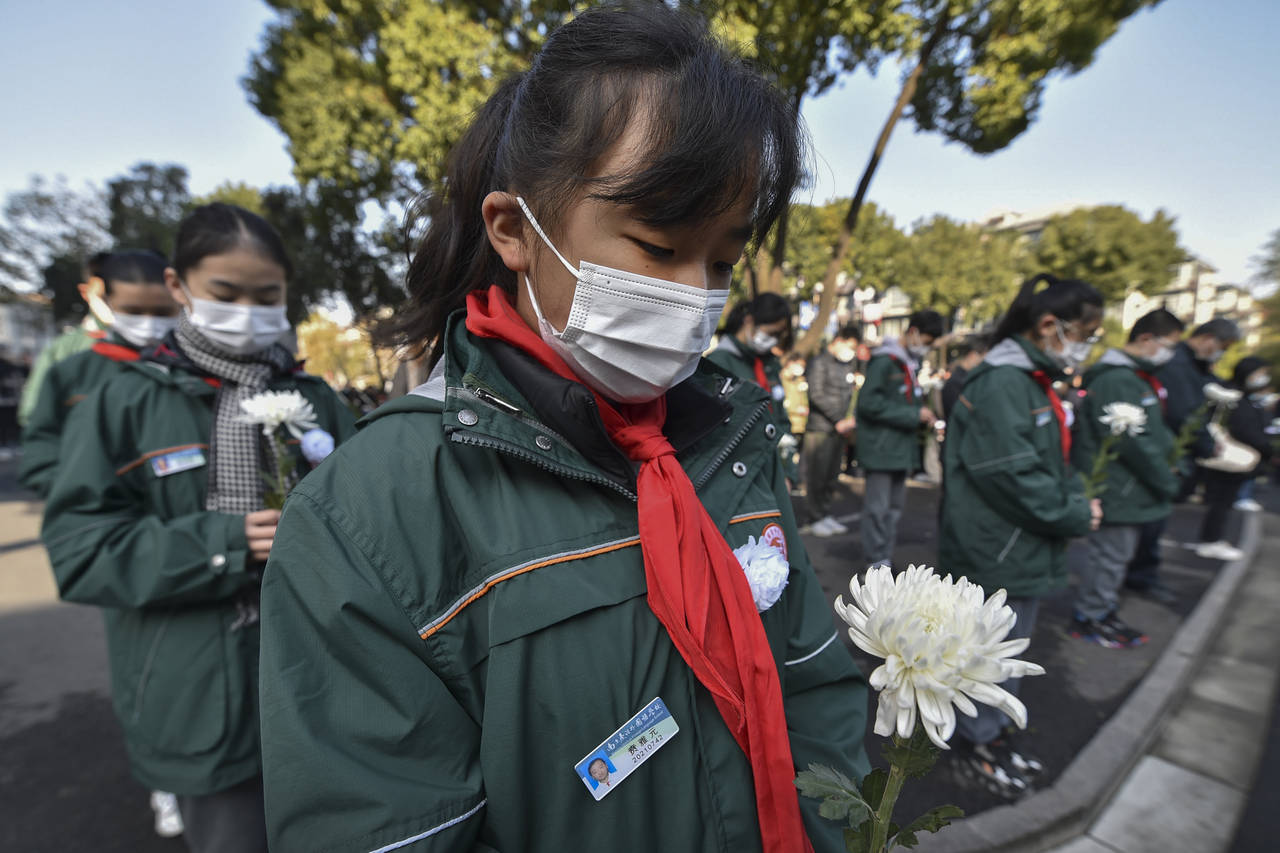 Students wearing face masks hold flowers mourn for the victims of the Nakjing Massacre at a mass burial site during the annual commemoration of the 1937 Nanking Massacre in Nanjing in eastern China's Jiangsu province, Monday, Dec. 13, 2021. China on Monday marking the 84th anniversary of the Nanking Massacre, in which it says hundreds of thousands of civilians and disarmed soldiers were killed by Japanese soldiers in and around the former Chinese capital. (Chinatopix Via AP)

HONG KONG (AP) — Hong Kong officials distanced themselves from the screening of a 1937 Nanking massacre video in a primary school that left some children in tears, saying schools are not required to screen such graphic footage.

The clip, which came from a documentary of the Nanking massacre, depicted Japanese soldiers killing civilians in the former Chinese capital. China on Monday marked the 80th anniversary of the killings that left hundreds of civilians and disarmed soldiers dead.

“While learning history is of paramount importance, how to learn is something that we will defer to the education sector, because we have very well-trained teachers, we have well-run schools,” Hong Kong leader Carrie Lam said during a press conference on Tuesday.

The screening of the brutal and violent footage caused some students to cry and sparked complaints from parents, according to local media reports.

The school did not immediately respond to an email from The Associated Press seeking comment.

On Tuesday, Lam confirmed that the video screened in the school had been included in a teaching materials checklist and that the education department had a duty to inform schools of the materials that are available in the public domain, but that there was no mandate that such footage had to be shown while teaching students about the Nanking massacre.

The massacre lasted from December 1937 to January 1938, with Japanese soldiers engaged in the mass killings and rape in Nanking.

Hong Kong authorities have included Chinese history as a compulsory subject and indicated that students will also learn about national security, following the implementation of a national security law in the city last year in response to massive anti-government protests.

Lam has also called for the strengthening of so-called patriotic education in schools, amid Beijing’s tightening grip on the city. Celebrity Cruises SPONSORED — A round-trip Alaska cruise from Seattle is an amazing treat for you and a loved one. Not only are you able to see and explore some of the most incredible and visually appealing natural sights on the planet, but you’re also able to relax and re-energize while aboard a luxury cruise […]
Close
Hong Kong officials distance themselves from Nanking footage