In this courtroom sketch, Ghislaine Maxwell enters the courtroom escorted by U.S. Marshalls at the start of her trial, Monday, Nov. 29, 2021, in New York. A late-June sentencing date was set Friday, Jan 14, 2022, for Maxwell following her conviction last month on charges including sex trafficking and conspiracy relating to the recruitment of teenage girls for financier Jeffrey Epstein to sexually abuse. (AP Photo/Elizabeth Williams, File)

NEW YORK (AP) — A late-June sentencing date was set Friday for British socialite Ghislaine Maxwell after her conviction last month on charges including sex trafficking and conspiracy relating to the recruitment of teenage girls for financier Jeffrey Epstein to sexually abuse.

U.S. District Judge Alison J. Nathan announced the June 28 date even as she waits to resolve defense claims that a new trial should be ordered after a juror’s public admissions after the verdict about his childhood sexual abuse.

The juror, who has never been fully publicly identified, told media outlets last week that he told other jurors during a week of deliberations that he was sexually abused as a child and used what he learned about the subject to persuade others to convict Maxwell.

Defense lawyers say the revelations warrant a new trial. The juror has retained a lawyer. And Nathan said she’ll rule at a future date what will happen as a result of the revelations.

Maxwell, 60, was convicted after a month-long trial in which prosecutors maintained that she recruited and groomed teenage girls for Epstein to sexually abuse from 1994 to 2004. Maxwell once had a romantic relationship with Epstein, but later became his employee at his five residences, including a Manhattan mansion and a large estate in Palm Beach, Florida.

Epstein, 66, took his own life at a Manhattan federal jail in August 2019 as he awaited a trial on sex trafficking charges.

Maxwell’s lawyers argued at trial that she was made into a scapegoat by federal prosecutors after his death.

Prosecutors say that they’ll drop perjury charges against Maxwell if she is sentenced on schedule. NEW YORK (AP) — After a month at no. 1, “Spider-Man: No Way Home” has finally been overtaken at the box office. Paramount Pictures’ “Scream” reboot debuted with $30.6 million in ticket sales over the weekend, according to studio estimates Sunday. “Scream,” a self-described “requel” that is both the fifth film in the franchise and […] No vaccine? No cafe, according to new French virus law

PARIS (AP) — France’s parliament approved a law Sunday that will exclude unvaccinated people from all restaurants, sports arenas and other venues, the central measure of government efforts to protect hospitals amid record numbers of infections driven by the highly contagious omicron variant. The National Assembly adopted the law by a vote of 215-58. Centrist […] 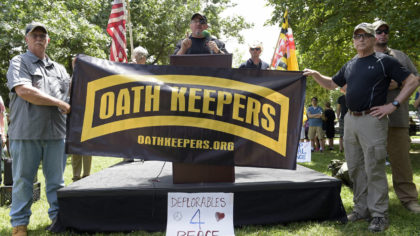 For Oath Keepers and founder, Jan. 6 was weeks in the making

WILMINGTON, Del. (AP) — Two days after the presidential election on Nov. 2, 2020, the Oath Keepers were already convinced that victory had been stolen from President Donald Trump and members of the far-right militia group were making plans to march on the U.S. Capitol. “We aren’t getting through this without a civil war,” the […] In California pot market, a hazy line between legal and not

LOS ANGELES (AP) — On an isolated farm, greenhouses stand in regimental order, sheltered by a fringe of trees. Inside are hundreds of head-high cannabis plants in precise rows, each rising from a pot nourished by coils of irrigation tubing. Lights powerful enough to turn night into day blaze overhead. In the five years since […] JUNEAU, Alaska (AP) — As partisan warfare has become the norm in state legislatures and Congress, Alaska is set to embark on an experiment to see if voters themselves can disarm the combatants. A new election system, narrowly passed by voters in 2020 and set to be used in this year’s races, is aimed at […] WASHINGTON (AP) — Donald Trump falsely declared in a weekend rally that public health authorities are denying the COVID-19 vaccine to white people because of their race. The former president seeded racial resentments in remarks that twisted the facts on public-health policy and exaggerated the effects of racially conscious antiviral treatment guidelines in New York. […]