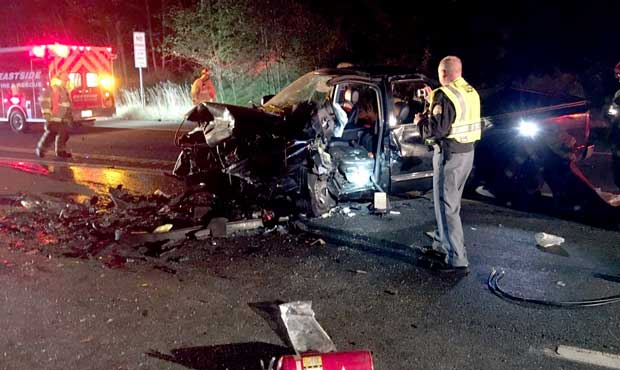 Two people are dead, one man is in custody at a hospital, and nearly nine miles of State Route 18 were closed to traffic amid the Friday morning commute near Tiger Mountain.

State Route 18 was closed between Issaquah-Hobart Road and I-90 over the morning. The highway was reopened shortly before 10 a.m.

“At about 5:19 a.m. this morning we received a call about a serious collision on State Route 18 in between the Tiger Mountain Summit and Issaquah-Hobart Road,” said Washington State Trooper Rick Johnson.

“A black Ram 1500 pickup was traveling westbound State Route 18, and crossed the center line and struck a Honda passenger vehicle head on,” he said. “The driver of the black pickup was transported to Harborview in serious condition, however, he was talking and alert at the time.” Two people in the car were pronounced dead at the scene. Trooper Johnson said there is “reason to believe impairment is involved.” It is unclear if that impairment was caused by drugs or alcohol at this time.

“Due to observations and other things … that individual is in custody at Harborview for investigation of two counts of vehicular homicide due to what we believe is impairment,” Johnson said.

Traffic backed up around the SR 18 closure. There was a four mile backup along Issaquah-Hobart Road, and 1.5 mile slowdown along nearby Cedar Grove Road within two hours. State Route 169 to the south of SR 18 was also experiencing significant slowdowns.

#Issaquah: Both directions of westbound SR 18 east of Issaquah-Hobart road are closed due to a serious collision. Per @wspd2pio: closures will be set at Issaquah-Hobart and I-90. Use alternate routes and expect delays. We will keep you updated on this thread pic.twitter.com/OtGbam7ULs

Trooper Johnson said that it does not appear conditions on the road contributed to the collision — it was very dark, the street was dry, with no fog.