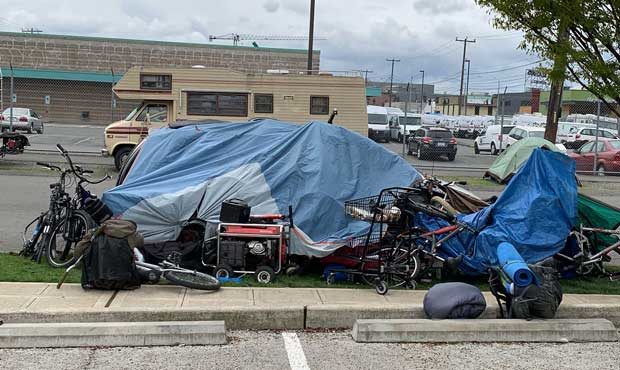 Dori: All Home spent your money on drag show at homeless conference A homeless encampment on public and private property near NW 46th Street in Seattle. (City of Seattle)

This makes me sick, on a personal level. You see, over the last couple of weeks, my wife and I have worked on our year-end philanthropic giving. One of the areas we wanted to focus on was homelessness, and so we gave to an organization that helps people on the streets.

Now I found out that this organization was at an annual event for the homeless-industrial complex, as I like to call it. You see, this organization is under the umbrella of All Home King County, whose stated mission is to make homeless “rare and brief and one-time.”

The C is for Crank blog had some interesting information about the entertainment at All Home’s annual Continuum of Care conference, which included a variety of public and private efforts, like the King County Department of Community and Human Services, Mary’s Place, and Catholic Community Services. So who would you bring in as entertainment for a conference with these groups that aims to find solutions to mental illness and drug addiction and people sleeping on the streets?

The music started thumping, and out walked Beyonce St. James, a drag queen from Spokane. For a video example of what St. James does, click here (warning: explicit content). According to reports of the event, the drag queen took off her top to reveal giant breasts “covered” only with pasties, gave lap dances, and took dollar bills that people waved.

According to the blog, a lot of people at the meeting were upset at how sexual the performance was. They were caught off-guard, because they had not chosen to attend the drag show out of their own free will. They were forced to be there because they attended the conference.

The theme of the conference was “Decolonizing our Collective Work.” How does swinging fake breasts into someone’s face decolonize our collective work?

We reached out to All Home and confirmed that Kira Zylstra, the All Home acting director, is on administrative leave. This was sent to us by Denise Rothleutner, chief of staff at the King County Department of Community and Human Services.

The department is aware of an event that occurred during the All Home annual conference on Dec. 9. We have placed the All Home director on administrative leave, pending the results of an investigation into the event and the leadership of All Home. Because there is an active investigation underway, we are unable to respond to specific questions about the event.

How do you think we are going to solve the homelessness problem when we have people like these folks in charge of things? How do you think the religiously-affiliated groups that were there, like Catholic Community Services, felt having a drag queen give lap dances at a meeting that should have been about helping those in need?

And make no mistake, these are your tax dollars at work. The City of Seattle and King County together put $100 million a year into the homeless-industrial complex. They are so misguided, so bankrupt, except with our money. And these are the people who are somehow going to solve homelessness around here?

As I’ve said many times, I don’t care if drag is your form of entertainment. If you’re a consenting adult, you’re free to seek out any entertainment you choose. But what is it with our government’s obsession with drag shows? Why does the King County Library System host Drag Queen Story Time? Why does a homelessness conference bring out a drag queen?

The government is always going to be the worst steward of your money, but my wife and I chose to give to one of the private organizations at this event. They probably didn’t know that this was going to happen. But I don’t want to give to this. I’m tired of having our money just laughed at in the way its overspent by our government, whether through Drag Queen Story Time at the library or the drag queen at the homelessness conference. How much did she get paid to come all the way from Spokane to perform?

Maybe the solution to homelessness is just to choke it off at the money-giving point. We’ll just cut back on all services, and through attrition, people will find that other regions are a better place to be homeless. Right now, you can come here, get your tiny home, shoot up heroin — soon in a supervised injection site, and the people running your agencies can watch drag shows.

I want out of the homeless-industrial complex. I want out. Do you?