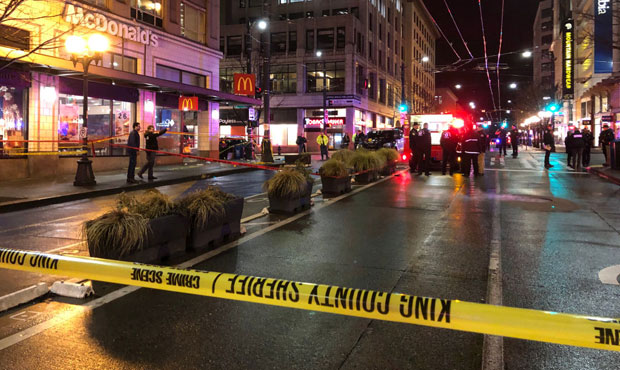 Political correctness and liberalism are literally killing people. This downtown Seattle shooting is an extension of all of that.

It’s about squishy prosecutors and judges who let repeat offenders walk free. It is about a city council that has designed this because anarchy will allow them to rebuild the city in a socialist image.

Today, a woman is dead and seven others are injured. A 9-year-old remains in the hospital. It is shameful but unfortunately predictable, given who we have running things around here.

As soon as I heard about the downtown Seattle shooting, I wrote this tweet.

Tonight’s downtown shooting is the inevitable outcome after years of not letting cops do their job… of encouraging drug use – and the gang warfare that comes with it… and politics putting criminals above law-abiding citizens.

Durkan should resign. Our city has gone to hell

People right away criticized me for blaming gangs when we did not know for sure who was responsible. Of course we knew it was gangs. I’m sick and tired of a squishy media that won’t speak the truth because it is so consumed with political correctness. Everybody knew exactly what happened last night.

We do not let the cops do their jobs. The cops know who the gang members and drug dealers are. They also know that if they see a drug transaction and write it up for the prosecutor’s office, it’s going to get kicked because it’s not a serious enough crime. And when prosecutors pursue criminals, judges let them walk free.

The two suspects in this downtown shooting have been arrested 44 times with 20 convictions and 21 times with 15 convictions. Marquise Tolbert, the one with 20 convictions, had three felonies last year alone. You tell me how someone with three felonies in 2019 is walking around free and able to engage in a shootout that kills a woman and injures a bunch of other people, including a 9-year-old kid. Both Tolbert and William Tolliver, the other suspect, are just 24 years old. They both have previously been arrested and charged with drive-by shootings and unlawful possession of a firearm in 2018. So the courts knew full well that these were gun-toting gang members. Why did our justice system let them walk free? Why do we place criminals above law-abiding citizens?

When you legalize drugs as we effectively have done by not prosecuting personal possession of drugs, then drug dealers of course will provide those drugs. And drug dealers tend to be backed by gangs. There is a known connection between the most violent gangs around here and the slinging of drugs, because they get in turf wars.

Jenny Durkan is an ineffective mayor. Look at what has happened with the issues people are most worried about — traffic, homelessness, and crime. The media is complicit with this. Just a few days ago, a column in the Seattle Times reported that crime is down. People on the streets know that crime isn’t down. They know that their homes are getting broken into and their car windows are getting smashed. Yet some in the media will say crime is down in Seattle. Yes, and how many shootings have we had since Tuesday? Police were near last night’s shooting because they were a few blocks away at a police-involved shooting in the middle of the afternoon. And so with the help of their compliant media, politicians are able to push out false stories that crime is down and everything is great.

Look at it like a math problem. The effective legalization of drugs + prosecutors and judges who let people walk free + politicians with no clue what they are doing = an inevitable surge in crime.

Jay Inslee sent out a nauseating tweet after the downtown Seattle shooting.

I am sick for those impacted by the gun violence in Seattle tonight.

Jay Inslee knew it was gangs, every bit as much as I did. But will he call it gang warfare? Of course not. (As I said, Political correctness and liberalism are killing people.) Instead, he will use this to grandstand about how we need to crack down on guns. Guess what? No matter what laws we pass, those two gang-bangers would have still had guns. Judging by their rap sheets, clearly they don’t care about breaking laws. They don’t fill out the proper paperwork and buy guns at stores — they get them on the streets. Criminals will always get guns this way. If political correctness means you won’t even identify the problem, then we have no hope. Our leaders are spinning in circles. And that is how politicians are a huge part of the problem.

Jenny Durkan has no business running the City of Seattle. We have to stop electing people based on identity politics. A listener named Joe, who is gay, wrote this message:

I moved to Seattle in 1996. For almost two decades I would tell friends and family, ‘The worst part of Seattle is better and safer than the nicest parts of any other major city in the country.’ That all changed about six to seven years ago. Sadly, my community, Seattle’s gay community, is partially responsible. At all cost and with no common sense they have spent hundreds of thousands, if not millions of dollars to give us Jenny Durkan, Ed Murray, Mitzi Johankneckt, and others. There is no regard for their qualifications, only the fact they are gay.

Here’s the thing. Jenny Durkan lives in a waterfront mansion on Lake Washington. She has a Seattle police security detail protecting her at all times. She has no clue what it is like to be a working person in Seattle — completely out of touch. King County Executive Dow Constantine has a similar escort, which he reportedly uses to get taxi service to bars. King County Prosecutor Dan Satterberg bought a gated home where the riffraff cannot get in. He is insulated from the consequences of his office letting gang members with felonies go.

In a press conference Thursday afternoon, Durkan and Seattle Police Department Chief Carmen Best both said that the downtown Seattle shooting started as “a dispute between two individuals” outside the McDonald’s. What was the dispute? “I didn’t order the chicken sandwich, you stole my Big Mac!” Or could it have been a “dispute” about gang warfare?

Here’s some free advice — maybe hold onto people who have 20 convictions including three recent felonies before they kill anyone.

Durkan said that we will not allow gun violence to “be the new normal” because it is preventable. Yes, gun violence is preventable. But if you want to get guns out of the hands of criminals, you have to do things you would never allow. Stop-and-frisk is the one thing that was proven to work against gang violence in New York City, but you are far too P.C. to ever try that. So don’t say that you will do everything possible to prevent gun violence. You won’t do the things that will actually work. You will just enact more legislation to take guns away from law-abiding gun owners.

We need a call to action on gun violence, across America and in Seattle. Gun violence anywhere is unacceptable, and it is especially jarring when it occurs in our city … We know that gun violence is preventable, and in the City of Seattle, we are taking urgent action to stop the cycle of violence.

She acknowledged that these guns were in the hands of people who should not have them (duh), but did not place any blame on the criminal justice system that she is part of that allowed these longtime criminals to walk free. Then she went on to tout Seattle’s strict gun laws, which are “some of the strictest gun laws in the state.” Well, we also have some of the worst gun violence in the state. So, Jenny, there doesn’t seem to be a correlation between the laws you pass and actually doing something on the streets to improve things for innocent people trying to get home after a day of work. Your gun laws were clearly a big, fat failure because we just had a mass shooting.

Carmen Best repeated the lie they’ve been trying to feed all of us, that Seattle is a safe city. Seattle is heading toward the other leftist cities plagued with gun violence — Baltimore, Chicago, L.A. There is a common theme between the cities that have gun violence, and that is the parties that are in charge. Best said we would “stop these shootings far upstream.” No, we’re not going to. Your system had these guys, with multiple felony convictions, including gun felonies; you let them go.

Neither Durkan nor Best mentioned that drugs were a major contributor to what happened on Wednesday. We have a major open-air drug market, and the cartels know it.

My initial instinct has been proven 100-percent accurate. We must let cops do their jobs, not tie their hands. We have to stop allowing personal amounts of drugs and letting gangs fill the marketplace. And finally, we have to stop electing people who have no business running cities and government departments. Instead, we must elect people based on their ability to do the job.

If politicians don’t have the guts to address the real problems or the political will to talk about real solutions, we are going to continue on this steep slide down. We have to be near a tipping point. We have to start wrestling our city back from the madness of lack of leadership. It has affected all of us, and it certainly has had a devastating effect on our city.

There are a wide variety of treatments options available for men with prostate cancer. One of the most technologically advanced treatment options in the Pacific Northwest is Stereotactic Body Radiation Therapy using the CyberKnife platform at Swedish Medical Center.
Close
Dori: Durkan’s failures, political correctness caused downtown Seattle shooting