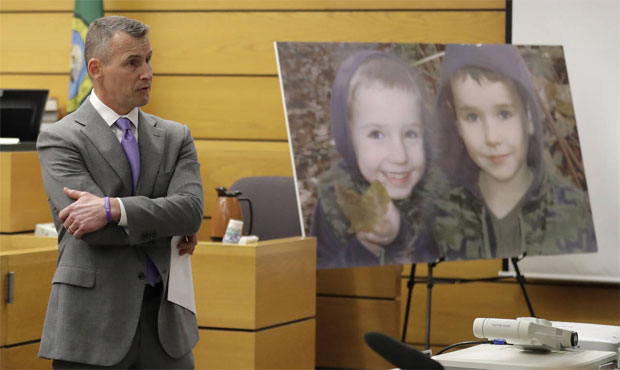 “These two precious boys ladies and gentlemen … this is the last chance they’re going to get for justice,” Attorney Ted Buck told jurors as opening arguments got underway at the Pierce County Courthouse in the lawsuit against DSHS, filed by Susan Cox-Powell’s parents over the murder of their grandsons by Josh Powell.

Chuck and Judy Cox had to leave the courtroom as Buck shared the horrific details of the murders of their grandsons, Charlie and Braden, by their father.

“On February 5, 2012 these boys were on a supervised visitation to go and see their father – an employee of the defendant of the state,” Buck told jurors, explaining the state was obligated to the boys that day in two ways.

“First, they owed them the obligation of having a supervisor who was trained and capable of doing the job of being able to intervene for the benefit of saving these boys,” Buck said. “Second, the state owed these boys an obligation to have this visitation at a place that was safe, that ensured their safety,” Buck continued, pointing repeatedly to the fact that visitation had been moved from a secure facility to Josh Powell’s Graham home, where he had all the control.

That left the boys defenseless as they experienced “incredible terror” at the hands of their dad, as Buck described to jurors what happened when Josh Powell got the boys locked inside the house that day.

“The fear, the betrayal, the pain, the confusion,” Buck said, suggesting to jurors what the brothers experienced.

He went on to explain that Charlie and Braden, while both injured from the attack, were still conscious lying on the floor.

“Their own father, the man who the state believed was an imminent risk to them, took gasoline and poured it on them, poured it on their faces,” Buck said, explaining in detail how their dad doused the entire home in gasoline and then lit it on fire, causing the home to erupt in flames, and killing Josh and the boys.

Buck argued DSHS failed to meet its obligation to protect the boys under their care and custody that day, and instead delivered them without warning to their father’s house.

“The place where he had complete control,” Buck explained going on to point out multiple other failures on the part of DSHS regarding Charlie and Braden, including not following up on multiple requests to investigate the home situation, ongoing warnings from the Cox family that Josh was a threat to the boys, or take into account Josh was consistently under suspicion in his wife’s 2009 disappearance.

But Lori Kooiman, the attorney representing DSHS, countered in her opening remarks that all involved were aware of the bad blood between Josh and the Cox’s with both sides slinging allegations at the other.

She also explained that DSHS does not have the authority to go take kids out of homes because it wants to, and in fact must follow strict state law which leans heavily in the direction of keeping kids with or working to reunite them with their parents.

Josh Powell lost custody of the boys after his now dead father, Steven Powell, who Josh and the boys lived with, was convicted on voyeurism and child pornography charges. He quickly worked to meet all the conditions required to get custody back, including moving out of his dad’s house and getting his own place in Graham.

Charlie and Braden were living with their grandparents in February of 2012, and Josh had been confident he was about to get the boys back until suffering a setback in court just four days before the killings, when police in Utah finally revealed bizarre sexual images they had found on one of his hard drives during the investigation into his wife’s disappearance. That prompted a judge to order him to undergo a psychosexual evaluation and keep the boys with their grandparents.

Kooiman also made a point in her opening statement to the jury to lay out the different people working on the boy’s case noting some were outside contractors not DSHS staff so the agency could not be held liable for any mistakes the contractors made.

And while Kooiman agreed the murders were a horrific tragedy, she encouraged jurors not to let their emotions take over.

“Don’t allow your thought process to be clouded by the facts of the brutal murders,” she told jurors instead urging them to focus on the evidence.

“You’ll see who is responsible for the murders of Charlie and Braden, and when you test that evidence there’s only one answer, and that answer is Josh Powell,” Kooiman said.

The trial is expected to last several weeks.

With minimal travel time required and every activity under the sun, Anacortes is the perfect vacation spot for all ages.
Close
Horrific details surface in lawsuit over death of Susan Powell’s sons