All Over The Map: Is it time to bring home Seattle’s beloved old locomotive? 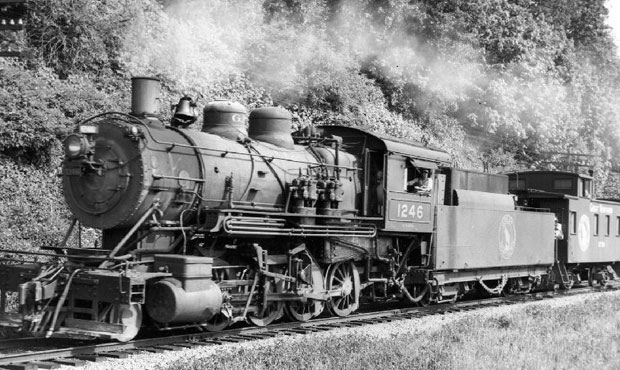 If you grew up around here and are of a certain age, you might remember an old steam locomotive that was displayed for years at Woodland Park Zoo in Seattle.

While the giant artifact has been absent for four decades, could it now be time to bring the old “Iron Horse” back home?

From the early 1950s until June 1980, a huge Great Northern Railway steam locomotive was displayed near the south entrance to Woodland Park Zoo. It was built in 1907 by Baldwin, and was a “2-8-0” – for those who know their locomotive terminology – and it was said to weigh 140 tons.

The number painted on the cab was “1246,” and the locomotive was used all over Western Washington in the first half of the 20th century.

Back in the late 1970s, the zoo was evolving from an amusement park to a conservation organization. They had recently gotten rid of their kiddie rides, and they wanted to get rid of the old locomotive too. MOHAI agreed to display it outside the old museum in Montlake, but the City of Seattle balked at spending the $100,000 it would have cost to move and restore it.

What’s now the Northwest Railway Museum in Snoqualmie also expressed interest in taking possession of old number 1246, but it was ultimately auctioned off for $1,500 to a guy named Fred Kepner who had plans for something called the Great Western Railroad Museum way down in Klamath Falls, Oregon. The locomotive and “tender” — the little oil car pulled behind — were disassembled and taken away in June 1980.

Local railroad enthusiasts were disappointed to see the locomotive leave the Seattle area. Then and now, there is still a lot of affection for the old Great Northern.

It’s the railroad of James J. Hill, who was known as “the Empire Builder,” and it was the railroad made Seattle its terminus, built the Cascade Tunnel, and had that cool “Rocky the Mountain Goat” logo and a big neon sign for decades on 4th Avenue downtown.

Mr. Kepner had big plans for the old Woodland Park Zoo locomotive. One was to rechristen it “City of Seattle” and run it on the Grand Canyon Railroad in Arizona. Another was to run it on the McCloud River Railroad at Mount Shasta. Those plans fell through, and it appears that the Great Western Railway Museum never really came to be, and the old Seattle locomotive began to slowly deteriorate.

Fast-forward to 2020, and Great Northern Number 1246 is still in southern Oregon at a place called Merrill, and it still belongs to Mr. Kepner.

Martin Hansen is Mr. Kepner’s attorney and is based in Bend, Oregon. On Thursday, Hansen shared some recent and not-so-recent photos of the locomotive and tender, which are both stored outside.

Asked about the condition of old number 1246 after decades of exposure to weather, Hansen wrote in an email, “This is not Seattle where everything rusts overnight. This engine is in Eastern Oregon [and] that is a high desert.”

If there is somebody out there reading this who has $45,000 to spend on the locomotive but who may be worried about the cost of moving it back to Seattle, KIRO Radio on Thursday also reached out to Gus Melonas, spokesperson for BNSF Railway, to inquire about the price tag of a move like that.

Melonas seemed genuinely excited to learn that the old Great Northern locomotive is still around and that it’s for sale. He grew up in Washington in a railroad family and remembers when old number 1246 was on display at Woodland Park.

“I remember as a kid, I came up from Vancouver, Washington to the zoo and that locomotive attracted as much attention as the elephants,” Melonas said. “They’re massive, and they’re exciting and they’re cool.”

Melonas says that when diesel locomotives began take over in the 1940s and 1950s, it was common for railroad companies to donate old steam engines for display in local parks around the United States. But, over the past several decades, many of those old locomotives ended up getting moved to museums or, in some cases, scrapped.

And that’s a shame.

“They’re huge and like the old dinosaurs,” Melonas said.

And, like the dinosaurs, Melonas says, “they became extinct. And these locomotives, very few survived, and the ones that have, when they’re displayed properly, they really do they attract a lot of people.”

While Melonas couldn’t commit without further discussion, he’s clearly eager to help out if the right combination of resources, leadership, and community support comes together to bring old number 1246 back to the Puget Sound area.

It should be clear that without those three elements, the old locomotive risks becoming a land-based version of the old streamlined ferry Kalakala, which was rescued from Alaska and brought back to Seattle, but then ultimately scrapped.

Kevin Weiderstrom is a lifelong rail fan. He lives in Wenatchee, and operates a miniature railroad in the Highway 2 community of Skykomish. Weiderstrom, who grew up in Seattle and graduated from Roosevelt High School, loves the old Great Northern locomotive, and has been attempting to bring it back home since 2004.

“That was the only reason I went to the zoo,” Weiderstrom said on Thursday.

Weiderstrom would love to see old number 1246 back on its home tracks, even though he estimates a cosmetic restoration – not including getting the steam engine running again – would run somewhere close to $750,000.

“It would be so great if it could just come back to Washington somewhere and get restored,” Weiderstrom said, pointing out the priceless railroad history that the locomotive represents, and the unique characteristics that only steam engines have.

“They’re living; it’s like they’re alive,” Weiderstrom said. “They have a personality.”

Special thanks to the Pacific Northwest Railroad Archive for their assistance with research and photos.

With minimal travel time required and every activity under the sun, Anacortes is the perfect vacation spot for all ages.
Close
All Over The Map: Is it time to bring home Seattle’s beloved old locomotive?