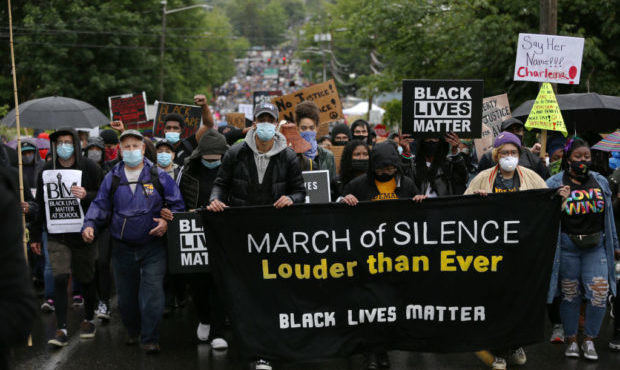 Thousands of people marched through Seattle on Friday as part of a Statewide Silent March and General Strike hosted by Black Lives Matter Seattle King County.

Photos from the march

As part of the general strike, and in some cases to allow their employees to attend a march, many local businesses were closed Friday or at least closed for part of the day.

Other cities across the region also joined with their own marches and demonstrations.

6:11pm – Meanwhile, at the CHAZ on Capitol Hill in Seattle, people are walking around among several tents.

5:45pm – Almost four hours after it started, Black Lives Matter Seattle King County’s Silent March through the city has concluded. Many other cities across the region also participated in their own demonstrations and marches today.

UPDATE: The March of Silence has officially concluded. Thank you to everybody who walked with us. For the safety of the community, please disperse.

We welcome cleanup help from volunteers at both Judkins and Jefferson Park so that we can get everyone packed up and back home. 🖤

4:54pm – Mill Creek police say there are people at the Mill Creek Sports Park parking lot for a peaceful protest. They expect the group to make speeches in front of the Freedom Field and then march to North Creek Dr. and Main Street before marching back.

4:21pm – The silent march to Jefferson Park is still underway.

An estimated 60,000 people are walking with us today in Seattle's March of Silence, with tens of thousands more all across the state. Thank you WA for turning out.

Today at the @BLMSeattleKC silent march, community walks to abolish the school to prison pipeline, end biased policing, and undo centuries of systemic racism in our country.

The march may be silent, but the message is loud and clear: #blacklivesmatter pic.twitter.com/PcQFM0BrKe

3:25pm – Police in Newcastle say about 300-400 people marched through their streets in silence.

All roadways have reopened following today's family-friendly BLM march in Newcastle. A little rain couldn't stop a crowd made up of an estimated 300-400 people, including City leaders and Councilmembers, from taking a stand against injustice and racism. Thank you, Newcastle! pic.twitter.com/spd8N0Sr3z

Great turnout and community engagement today as we supported a #march for #justice. We’re proud to be your police department! pic.twitter.com/cfXlwsKKd3

2:58pm – A line of marchers has stretched along 23rd in South Seattle.

2:42pm – Demonstrators have gathered at the West Seattle Junction, holding signs and standing in silence.

2:27pm – Two large crowds are reportedly marching in silence through West Seattle to the Junction.

Demonstrators on the Junction in West Seattle converging on California Ave SW and SW Alaska St. Consider other routes around The Junction and use caution for additional pedestrians on the roadway in West Seattle. pic.twitter.com/E6wXBVOmGv

2:15pm – Another group is marching from Cal Anderson Park to Madison Park via Madison Street. The march is reportedly led by youth.

1:57pm – Hundreds of people are at Judkins Park ready for a Silent March through downtown Seattle. Seattle DOT is warning drivers to be aware of the route.

March of Silence happening this afternoon in the Central District from Judkins Park to Jefferson Park. Per route moving south on 23rd Ave S, consider alternate routes and expect delays in the area. Use caution for additional pedestrians in CD roadways. pic.twitter.com/unKrWxBN1F

For as long as I can remember, Capitol Hill has been autonomous – it's always been a place where people go to express themselves freely. Today at the #CHAZ, I spoke with organizers and community about how we can move forward and keep our communities safe, together. pic.twitter.com/XhtXHiIl9K

Black Lives Matter Seattle-King County hosted a Statewide Silent March and General Strike on Friday, June 12, 2020. A few of the local group’s leaders held a Facebook live Thursday evening to provide a community update and share details about the event.

Follow moment-by-moment accounts of Thursday in the CHAZ here

“Thank you to everyone who has reached out with their support, their donations, and is participating in the strike tomorrow,” said Ebony, a member of the board of directors.

“As we know, this is a silent march and we have done that for a couple reasons. On a more health focused level, this is to still decrease the risk of transmission for COVID-19 between folks,” Ebony said. “But also it’s really a silent march because we want this to be a moment to honor, and hold space, and mourn those who have lost their lives to police brutality and institutional racism in this country.”

“This movement is to get justice for those who have unjustly lost their lives,” Ebony added.

The march is intended to be a black-led march, with black youth and black people at the front. Black Lives Matter Seattle-King County is asking participants to allow room for black folks to get to the front, then POC allies behind them, followed by white allies. If you are riding your bike, you may follow behind the march.

In addition to the silent march from Judkins Park to Jefferson Park, there are other marches happening statewide in cities and communities. A list of known marches and gatherings Friday in Washington state have been collected here.

Black Lives Matter Seattle-King County is encouraging people to use Friday as day of action.

“For those who can’t participate in a physical gathering, we urge you to participate in the general strike and in actions that we post online throughout the day.”

As part of the general strike, and in some cases to allow their employees to attend a march, many local businesses are closed Friday or at least closed for part of the day.

“For every donation that [Black Lives Matter Seattle-King County] receives on [Friday’s] calendar date, we will be giving that money to other organizations, instead of us,” said Liveo De La Cruz, the group’s treasurer.

The Lavender Rights Project, and black press in the area — including The Seattle Medium, South Seattle Emerald, and KRIZ — are among the groups that will receive the donations.

Black Lives Matter Seattle-King County is a 501(c)(4), which means donations are usually not tax deductible. De La Cruz said there will be a way on Friday, June 12, to make a tax deductible donation since the funds raised will be going elsewhere. If you want to donate to Black Lives Matter Seattle-King County directly, there will be a way to do so.