Rantz: After attacks and taxes, Amazon looks to expand out of Seattle 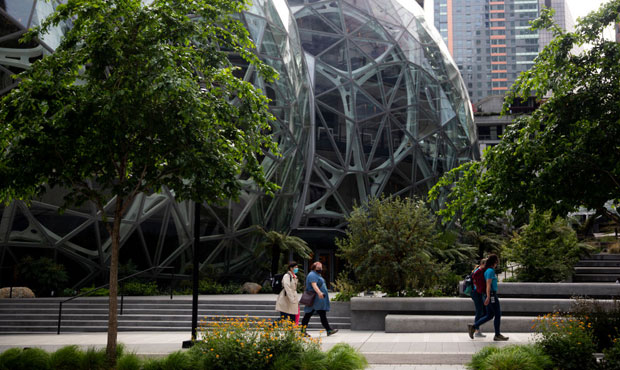 Masks being worn outside the Amazon spheres in downtown Seattle. (Getty Images)

After endless attacks from Seattle City Council, e-commerce giant Amazon appears to be putting out feelers for further expansion outside of Seattle. This could have crippling economic implications to the city.

In a daily poll to Puget Sound employees, Amazon asked its workers where they would rather work, in addition to Bellevue and Seattle. The options provided were Bothell/Woodinville, Renton, Tacoma, Redmond, and Issaquah. Amazon has confirmed the poll is authentic, screenshots of which appeared on social media and Reddit.

Amazon has already expanded to Bellevue, and may be ready to make some further moves.

Seattle's Amazon employees received a poll today about areas they're prefer to work — all outside of Seattle.

Sources say Amazon is growing tired of attacks & insane taxes by Council & this could be start of continued expansion out from Seattle.

The shrinking Amazon footprint in Seattle

Behind the scenes, I’m told Amazon has tired of Seattle City Council’s attitudes toward the company. The company isn’t just blamed for the city’s woes — from housing affordability to traffic — but its CEO, Jeff Bezos, is frequently used as the poster child for dangerous anti-capitalist attacks at the hands of socialist zealot Kshama Sawant.

And then, of course, is the legislation drafted to specifically target Amazon and similar businesses.

Amazon, and other qualifying businesses, will be taxed 1.4% for every employee making over $150,000, and 2.4% for employees making over $400,000. After it passed, experts noted it would likely push Amazon to ditch the city.

“I think there’s no doubt that we’re going to hear several announcements over the next couple of weeks of some massive expansion by Amazon into Bellevue,” Windermere Chief Economist Matthew Gardner told KIRO Radio at the time. “Really, it’s going to become one of those really bad-kept secrets.”

An Amazon spokesperson would not provide a comment on the record.

‘I would definitely’ leave

One Amazon employee, speaking to the Jason Rantz Show on KTTH on the condition of anonymity, didn’t blame the company for considering a move or expansion elsewhere.

“Amazon seems to be evaluating its options for moving out of Seattle if necessary,” the employee explained. “I think it’s clear to anyone living in Seattle that our local officials know only how to blame others for problems that our city’s public policy has created. Amazon’s success in spite of the failures of Seattle’s city government make Amazon an easy target when looking for someone to blame.”

The employee said if they were the sole decision-maker, “I would definitely minimize my footprint in Seattle.”

Amazon routinely polls employees as the company plans its long-term growth in and out of the region. But during the coronavirus pandemic, Amazon, like many other companies, has seen success with a work-from-home model.

The data Amazon gathers from this poll, along with what they’ve learned from the remote model they’ve adopted, could make them less reliant on Seattle-based operations. This would allow their workforce to live in more affordable cities not plagued by homelessness, addiction, and lawless activists.

It’s unclear if Amazon would completely ditch Seattle for a neighboring city. It’s also unlikely in the short-term. But any lessening of the Amazon footprint could further destroy the Seattle economy. And it’s important to note that this poll went to area-employees, including those in Seattle. That means those who work in Seattle who say they want to leave Seattle play a crucial role in the future of Amazon’s footprint in the Emerald City.

Revenue projections for the city took another significant hit — $26 million — thanks to the coronavirus. Businesses propped up exclusively by Amazon employees have struggled. Some have already permanently closed. If Amazon allows its Seattle workers to work from home longer than anticipated, which cuts down on the maintenance and upkeep costs of their offices, the economic impacts will be felt. And, if the company were to close offices, it would be devastating.

Meanwhile, cities like the ones mentioned in the Amazon poll would see significant economic benefits at a time they’d need it most. Bellevue has earned the attention — and expansion — of Amazon for being business-friendly and driven less by ideological rigidity.