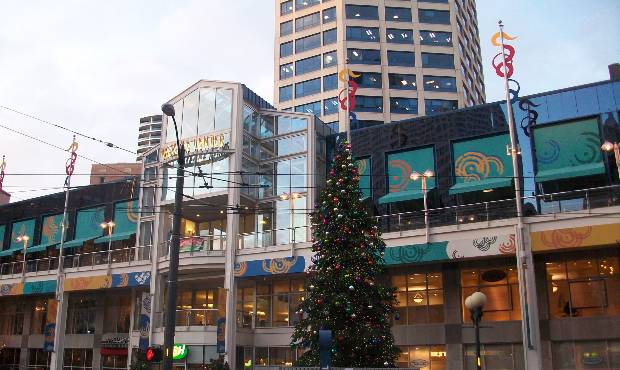 The holidays will be celebrated a little different than Seattleites are used to at Westlake Park this year due to the pandemic — but the Downtown Seattle Association says there will also be plenty of new ways to make memories.

Many Washingtonians grew up going downtown each year for the lighting of the Christmas tree and Macy’s (originally Bon Marché) star the day after Thanksgiving. And while that won’t happen in-person this year so as to prevent crowds, tonight’s annual tree and star lighting will still be broadcast virtually on KIRO-7 TV.

The holiday carousel also will not be running this year. However, there will be a whole host of new events that may indeed become beloved traditions in future holiday seasons.

This year’s events are aimed at giving people activities they can do individually, on their own time throughout December, while outdoors — instead of the usual kind of events that bring crowds of people to the same place on the same date.

“We’re trying to find a way to mark the holidays with things that people can experience where they can do it all on their own, or they can be distant in a responsible manner,” said James Sido, director of media relations for the Downtown Seattle Association.

An augmented reality game similar to Pokémon Go will create virtual, 3-D festive images for players to find downtown with their smartphones.

In Westlake Park, a collection of 80,000 holiday lights in the shapes of ornaments, presents, and other festive images will create a jolly walk-through in Westlake Park. Presented by Amazon, the display will be similar to past light displays at Woodland Park Zoo and the Bellevue Botanical Gardens.

“You’re looking at more than 80,000 lightbulbs … a terrific photo opportunity, but also [an opportunity] to walk through that part of downtown and really enjoy a well-lit, festive experience,” Sido said.

The new-and-improved Bon Marché star allows people to design their own light show on the star, with some of the proceeds going to Mary’s Place.

“Just because a lot of the the traditions that we’re used to in Seattle and in downtown are not available to us this year, doesn’t mean you can’t go downtown and enjoy yourself,” Sido said. “There’s a lot to do and see in the heart of the city, and there are a lot of small businesses down there that really need our support. This would be a great time to help lift them up during the holidays.”

More than 140 businesses have closed downtown since March due to the loss of the summer tourism, and Sido said that mom-and-pops are counting on the holiday season to survive.