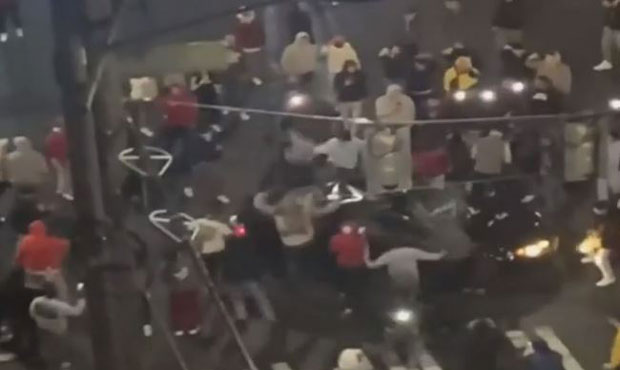 Street racers flip over, shoot fireworks at car in the University District SEATTLE — KIRO 7 obtained astonishing video showing the moment street racers turned against one of their fellow drivers and flipped his car in the middle of an intersection.

The incident happened Friday, April 9, at 47th Street and 11th Avenue in the University District.

With the car successfully overturned, spectators then decided it was time to celebrate with fireworks. Video shows a person shooting fireworks directly at the vehicle, causing a minor explosion in the intersection.

FLIPPING OUT… over street racing! @KIRO7Seattle is FIRST with this CRAZY video from the University District, showing the moment street racers turned on one of their own– flipping over his car and then shooting fireworks at it! @SeattlePD says NO arrests have been made pic.twitter.com/eCQWFI2PKS

It was a crazy, chaotic spectacle that happened right below Kylee Hoffman’s apartment.

“I truly haven’t seen anything like it in my entire life,” she told KIRO 7. “I truly could not believe my eyes.”

According to Hoffman’s footage, street racers went as far as to use a giant Ford Bronco to pummel the car through the street.

She said the man who drove the car escaped unhurt only a few seconds before spectators flipped his vehicle.

Hoffman added that it appeared he was one of the racers himself but that he fell out of favor with his fellow speeders.

“All of a sudden, one of the main people in the intersection yelled, ‘Rat… there’s a rat!’” she said.

It’s far from the first time Hoffman has witnessed “the need for speed” from her apartment.

She told KIRO 7 this marked the third time in a month that street racers darted through her neighborhood.

“They should probably choose a location that is not home to about a few thousand students within a few blocks of the area,” she commented.

In an exclusive interview with KIRO 7, Hoffman said she believed officers needed to do a better job of enforcement against street racers.

Otherwise, she said she worried that one of the street racers would be on the “fast track” to tragedy.

“Sometimes I feel like I might have to have evidence of someone dying sent to the news,” she noted.

Seattle Police said they’ve made no arrests in any of the street racing cases that have happened in the University District.

They added that nobody has been seriously hurt in any of the incidents.