Portland begins sending homeless people to other cities, including Seattle 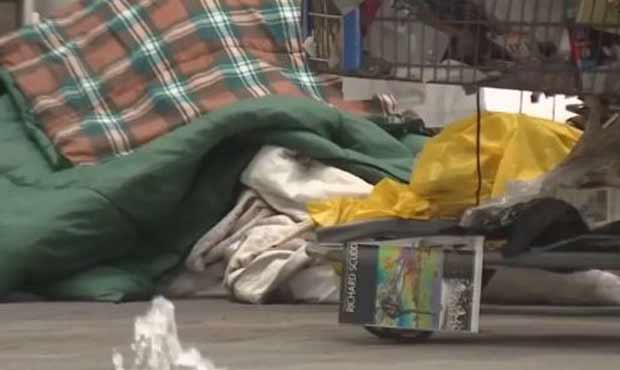 Portland started a pilot program Thursday to send homeless people to other cities where they have family. (KIRO 7)
(KIRO 7) The City of Portland began a pilot program Thursday to buy one-way bus tickets for homeless people who approach agency staff to say that they have family to stay with in another city. The pilot is set to be completed by the end of June.

On Thursday, the city paid for the first two bus tickets, with destinations of Seattle and Spokane.

Susan Salisbury, a spokesperson for Portland’s 211 program, which is handling the pilot, told KIRO 7 that the agency staff members need to call the homeless person’s family or friends in that other city, to verify that there is in fact a plan for housing. Without that verification, they will not buy the bus ticket.

Related: Seattle cops using their own money to get the job done

Salisbury said there would also be a follow-up call in a few month to check that the person is actually housed in that new city and no longer on the streets.

In November, KIRO 7 spoke to Teman Crawford a twice-convicted felon living on the streets of Seattle. He said police in Oxnard, Calif. had purchased a bus ticket for him to come to Seattle.

“It was $116. They said it was a once-in-a-lifetime opportunity. Don’t come back,” Crawford said.

When asked why he picked Seattle, Crawford said his friends had called this the “land of opportunity.’”

“There’s a lot of angels up here. A lot of love. People buying people brand new tents, giving them blankets, putting food in their stomachs,” he said.

On Friday, a homeless man named Steve told KIRO 7 he was given a bus ticket to come to Seattle from Phoenix.

He said he told the Phoenix location of St. Vincent de Paul that he wanted to come to Seattle where he has relatives. They purchased the ticket for him, but he admits now he does not actually have family here.

Steve said he has a much better chance of surviving in Seattle, compared to Phoenix. He said he wanted a change in scenery, and he preferred the weather here.

He added, “You can never starve in this town, everyone feeds you.”

Martin Duffy, the proprietor of Assemblage in Pioneer Square, sells antiques just a block from the Union Gospel Mission.

“It bothers me as a business owner,” Duffy said, describing how he has seen shootings, stabbings and drug deals outside his business. One bullet even came through his shop window.

“We keep putting more and more money into services, and there’s never enough for services,” he said.

But Mark Putnam, the director of AllHome, said the data shows most homeless people may actually be from the area.

KIRO 7 asked the city of Seattle and the King County government if they also buy tickets for people to leave town.

Both entities responded, saying that nonprofit partners sometimes purchase bus tickets for people with taxpayer dollars, with the same method of making sure the person has a place to live in the next city before sending him or her there.

A spokesperson for the Seattle Human Services Department told KIRO 7: “As part of the $7.3M in one-time funding made available through the State of Emergency on homelessness, [Human Services Department’s] contracted outreach providers use flexible funds that are intended to meet the individual needs of each individual experiencing homelessness and to address their specific barriers to stable housing. This funding can include money for motel vouchers, rental deposits, car repairs, legal fees, driver’s license reinstatement, or bus fare. Bus fare can be provided to transport an individual to another city where he or she has options for either employment or stable housing that have been verified by a case worker.”

One of the Seattle nonprofits doing this is the Low Income Housing Institute. LIHI currently operates the three authorized tent encampments at Interbay, Ballard and Othello.

Since October, LIHI has purchased bus tickets for four people, three of whom went out of state.

Charese Jones, the manager of supportive services at LIHI, said this arises when they ask a series of questions to new people arriving at the camps.

“We ask, ‘If we send you to a family member’s house, or anywhere to not be homeless, would you be able to get there?’ We can send you bus, train or plane,” Jones said.

Jones said the four people they sent away have been confirmed to be living in housing in their new cities.

There are a wide variety of treatments options available for men with prostate cancer. One of the most technologically advanced treatment options in the Pacific Northwest is Stereotactic Body Radiation Therapy using the CyberKnife platform at Swedish Medical Center.
Close
Portland begins sending homeless people to other cities, including Seattle