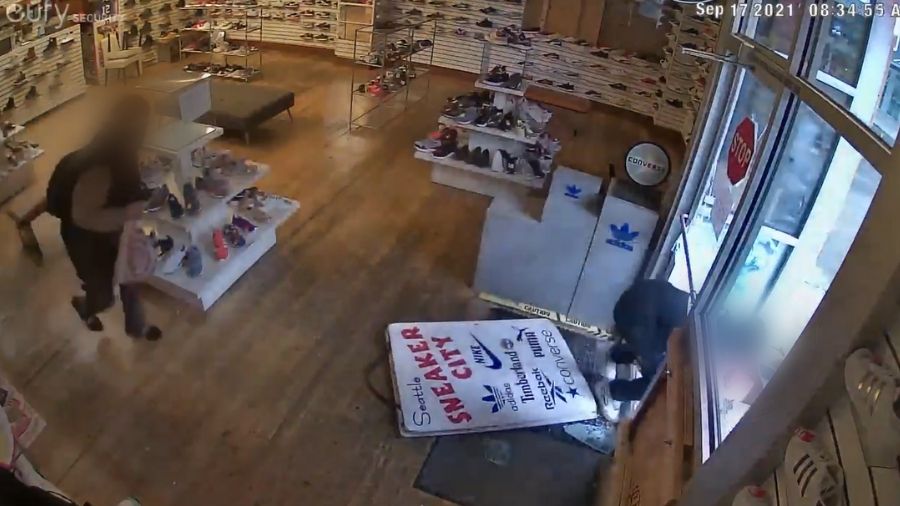 Sneaker City is a family-owned business that has operated next to Pike Place Market for 20 years. They’re quitting Seattle and going online after suffering too much damage from endless shoplifting.

The sneaker business has been plagued by shoplifting coming from homeless people and what appears to be organized crime. After stealing their products, the criminals end up selling them blocks away at open-air bazaars that the city refuses to shut down.

Sneaker City has lost thousands of dollars in products. They’ve also had to spend more money on staffing to provide extra eyes on would-be thieves. But the pain doesn’t stop there.

Owner Caroline Cho says they see their storefront windows smashed two times a month. It costs her family $1,000 extra a month in expenses, on top of having to watch the store overnight before the window gets fixed to prevent other criminals from getting into the store.

While Cho and her family don’t want to leave their brick-and-mortar store, she says the crime was a “huge factor” in making the decision to go online. The area has been changing over the years, but the recent crime surge has made operating a business impossible.

“This area, in particular, gets hit very hard. Most of it is overnight, where they break windows, come in and grab merchandise, roll on up to Third Avenue and sell it to the highest bidder,” Cho told the Jason Rantz Show on KTTH. “During the day, people will try to come in and just walk out with merchandise because most of the corporate companies here are not allowed to do anything about it. And so they think all stores are the same.”

Her corporate neighbors, like Target, are victims, too. The downtown Target gets hits by shoplifters “every 10 minutes,” according to one security staffer I spoke to at the store. On a recent visit to the Target in downtown Seattle, I witnessed two shoplifting incidents within 12 minutes. And the store made national and international headlines after I exclusively reported a homeless man caught on surveillance video allegedly shoplifting a 70″ LG television.

“Even if the rent was the same, the crime issue is such a big issue in terms of the lack of sleep I sacrifice to try to protect my store until somebody can come secure it,” Cho notes. “The money going [into the fixes], because insurance doesn’t cover that small amount so it’s out of pocket that I pay for glass. And if [thieves] do get in, then it’s the merchandise that they take and the time between the insurance claims and everything else. And then with the insurance claims, I get the amount that I paid for it, but not the profit that I would have made on products that I can’t get right now because there’s a supply chain issue.”

Several stores nearby are shuttering or thinking about it. Jay Ashberg’s Seattle Shirt Company cites the same concerns.

“During the day, we’ve got people trying to shoplift all the time. And then at night, … there’s been in the last three, four months, we’ve had our glass broken three or four times and three actual burglaries,” Ashberg told the Jason Rantz Show on KTTH. “And two were literally one night after the next. … And then one was like three, four months ago. So we’ve had three burglaries, but we’ve never in 30 years [prior] had any burglaries at all.”

She’s right. Seattle isn’t the same with 2021 seeing a 20% violent crime increase over the previous year — a 14-year-high rate of violent crime.

The concerns are mocked

Despite the chorus of voices raising concerns about the crime, Seattle City Council members are silent. They won’t tackle the homeless problem because they don’t believe in sweeps. They won’t offer more funds to the understaffed Seattle Police Department to go after the organized crime because of their adversarial relationship with law enforcement. New Mayor Bruce Harrell says he’ll offer a plan, but substantial details haven’t been provided.

What’s worse, you have Seattle activists and media outlets downplaying or justifying the crime.

After my report on the crime facing the downtown Target location, Stranger blogger Hannah Kreig chided me for demanding consequences for prolific offenders.

“But of course, so many people need a pound of flesh when a poor person does something silly that hurts no human person,” Kreig wrote.

But it does hurt people. Cho is hurting financially, and every time a business is victimized to this degree, you can bet on prices going up for consumers.

“It affects everybody. The more crime there is, the more insurance claims there [are], the more costs go up, and the more the prices of these products go up. And then everyone complains that everything’s so expensive,” Cho said. “But that’s the cost of all the crime and the cost to cover everything that we’re dealing with at this time. So it’s not just its effects now, it actually affects everyone, including the people that don’t realize it’s affecting them.”

Celebrity Cruises SPONSORED — A round-trip Alaska cruise from Seattle is an amazing treat for you and a loved one. Not only are you able to see and explore some of the most incredible and visually appealing natural sights on the planet, but you’re also able to relax and re-energize while aboard a luxury cruise […]
Close
Rantz: Plagued by shoplifting, another Seattle small business calls it quits