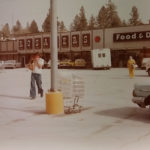 May 18, 1980 is a date that still means a lot to anyone who was living in the Northwest 42 years ago when Mount St. Helens erupted. KIRO Newsradio caught up with musician Chris Ballew to hear his unique memories from that day – of driving through darkness and ash in Eastern Washington, listening to news on the radio, as well as the hunt, decades later, for a mythical lost cassette tape.

The Seattle native was the frontman for The Presidents of the United States when the trio had a series of frothy and funky hits in the 1990s. Ballew later morphed into Caspar Babypants, an upbeat and lighthearted musical persona he performed and recorded as for about a decade.

Forty-two years ago, Chris – who was 14 at the time, and his younger brother Tim, their mom Barbara, and family friend Jean Sifferman – all drove to Spokane so Chris could take part in his Catholic Confirmation ceremony there. The mass was held on the fateful morning of Sunday, May 18, 1980, and when the ceremony was over, they jumped into their vehicle, which was Chris’s dad’s company car, a mid-1970s Ford Granada. They headed west on I-90 to get back to Seattle, hoping to arrive by early afternoon.

They were somewhere east of Moses Lake when the distant sky over the Cascades started to look very strange.

“We could see this big cloud coming over,” Ballew told KIRO Newsradio. “We didn’t have the radio on or anything. We didn’t know [about the eruption], we didn’t hear it in Spokane or feel it or anything, so we thought it was a storm.”

But storms generally don’t look quite so ominous or huge.

“As it approached and got closer and closer, it seemed to take up the entire sky,” Ballew continued. “And we thought, ‘Wow, this storm is going to be epic.’ And then it went over the car, [and the cloud] kept going, traveling east, and we we’re on I-90 going west.”

“Pretty soon, it shut off the horizon and all of a sudden, it was nighttime,” Ballew said, describing the moment when the ash turned day to night over much of Eastern Washington. “And then we’re like, ‘Okay, we need to turn on the radio.’”

The station they found was KZUN in Spokane Valley. Station founder and longtime on-air personality Bob Swartz was speaking, describing what had happened to Mount St. Helens and what the ash cloud was doing to Eastern Washington.

Chris says the radio was an old JVC boombox. And fortunately, Barbara Ballew – Chris and Tim’s mom – was something of an amateur documentarian. She pressed “RECORD” and captured several minutes of Bob Swartz as he broadcast live from the KZUN studios east of Spokane.

With Swartz’s voice for company, the Granada continued westbound until the group found I-90 blocked by the State Patrol at Moses Lake. Chris’s mom turned the car around and headed back toward Spokane. On the drive east, they faced falling ash, blizzard-like poor visibility, and fear of the unknown in the midst of an unusual and unprecedented experience.

And that’s when it got pretty scary.

“By that time, the windows of the car became hot to the touch, and we didn’t know how much hotter they were going to get, so that was kind of freaky,” Ballew said. “My mom, who was driving, got vertigo, and couldn’t tell what was up and down, what was left and right, so my brother and I had to tell her when she was driving off the road.”

A moment of that backseat-driving is actually captured on the old cassette tape – somehow the ‘record’ function switched momentarily from the in-line radio to the built-in microphone.

At one point, Barbara Ballew did drive off the road and the Granada got stuck alongside the freeway in a ditch.

“Some miraculous human being came along with a four-wheel-drive truck with a winch on it and pulled us out, so we got rescued,” Ballew said.

Freed from their roadside trap, Barbara Ballew and her high-pitched co-pilots and friend Jean Sifferman headed once again for Spokane. Before too long, they arrived safely and stayed with a friend on the city’s ash-encrusted South Hill.

Reflecting on the experience more than four decades later, Chris Ballew is philosophical.

“I cheated death. I feel like if that truck with that winch hadn’t come along, we would have been stuck out in the middle of the ashfall and things could have gotten real bad,” Ballew said. “There’s been [other] times where I should have maybe not survived, I’ve got a collection of maybe six things, six times where I sort of got a hall pass.”

“The volcano’s one of them, for sure,” he said.

While the circumstances of May 18, 1980 would never have been forgotten by Chris Ballew, the audio evidence – that cassette tape of KZUN and its moments of family chatter – was only discovered because of a hunt for another cassette that Chris Ballew is still looking for.

Barbara Ballew passed away in 2012. When she did, Chris inherited a big box of her old cassette tapes. That jogged his memory – not about Mount St. Helens, but about when he was very young and was first starting to write and record original music.

In those days, Ballew says, his allowance was such that new blank cassette tapes were a luxury that was often hard to come by.

“So I used to steal my mom’s French lesson cassettes, and so a lot of my early recordings had little French lesson bits in between them,” Ballew said. “But there was a four-song little cassette that I made way early in my career as a songwriter that I lost, and the atmosphere of those four songs . . .  I’m constantly trying to recapture what I think they sounded like.”

“And I thought, what if in this box I find that cassette with those four songs on it?” Ballew said.

So that’s why he listened, from start to finish, to something like 80 tapes in that box from his mom – he was hoping to find what he calls “proto-Caspar songs” – material Ballew says consisted of “little bouncy songs” that are the earliest evidence of the musician and songwriter he ultimately became. In other words, priceless.

Unfortunately, that long-lost – now almost mythical – tape never did turn up, but the Mount St. Helens tape did – also priceless, but in a different way.

Meanwhile, all that volcanic ash meant that Chris and Tim and their mom and her friend were stuck in Spokane for about 10 days before they could safely drive back to Seattle. But maybe that was something of a silver lining, or at least a way to supplement Chris’s meager cassette tape budget.

Ballew says the people they stayed with in Spokane really liked Chinese takeout. The frequency of their purchases and their years-long habit of saving containers made it easy for him to become something of a “volcano entrepreneur.”

“Anytime they got hot mustard in a little cup with a lid, they saved it,” Ballew said. “So they had hundreds and hundreds of these empty cups, and I filled them up with ash and brought them back to Seattle and sold them at school for 50 cents a pop. And I made fifty dollars selling ash.”

Mount St. Helens made an impact on Chris Ballew – from the near-death experience along I-90, to selling ash, to the discovery of the old cassette a decade ago, to the time he’ll spend on the anniversary thinking about the 57 people who lost their lives, to the material he wrote for his old band. It all runs pretty deep for the artist formerly known as Caspar Babypants.

“I mean, there’s a Presidents’ song called ‘Volcano,’ [and] it wasn’t about that necessarily,” Ballew said. “But volcanoes are in my blood now.”

Editor’s note: special thanks to Freya Liggett of the Northwest Museum of Arts & Culture – “the MAC” – in Spokane for first documenting this story for the museum’s 40th anniversary commemorative exhibit about the eruption and its aftermath. Wildfire season is here, and though – knock on tinder-dry wood – the Puget Sound area has not yet seen the flames and smoke of previous summers, there’s no question that conditions could shift at any moment, as they have so many times over the decades. All Over The Map: State agrees to rename Harney Channel in the San Juan Islands

A group of residents of the San Juan Islands believe the time has come to rename a stretch of saltwater known as Harney Channel. Snohomish Health District SPONSORED — Cheers to the parents and guardians who keep their kids safe and healthy. The dad who cooks a meal with something green in it, even though he’s tired and drive-thru burgers were tempting. The mom who calms down the little one who loudly and resolutely does NOT want to brush […]
Close
Local music legend Chris Ballew’s bizarre story of surviving the eruption of Mount St. Helens