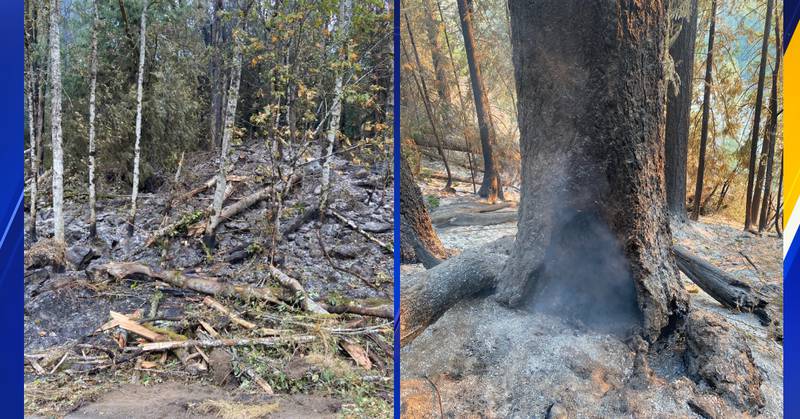 After the Bolt Creek Fire closed down a 13-mile stretch of US Route 2 more than a week ago, the Washington State Department of Transportation (WSDOT) has announced that they are hoping to have the road reopened by Monday, once they clear burned trees that are a threat to public safety.

US 2 over Stevens Pass has been closed since Saturday after the Bolt Creek Fire erupted north of Skykomish. It has burned more than 10,000 acres and the percentage of completion of operational objects is 95%.

The fire above the highway has burned out trees and loosened rocks, spilling them onto the road.

18 miles of the highway remain closed from milepost 36, near Sunset Falls, to milepost 49, west of Stevens Pass.

2 cross-state highways – US 2 and SR 20 – closed amid wildfire, mudslides

Arborists with the state parks have removed more than 200 trees that have fallen onto the road. They are also working to identify and take down potentially hazardous trees alongside the roadway.

UPDATE: Crews are working toward a US 2 reopening on Monday, 9/26. They continue to remove burned roadside trees that still pose a threat to public safety. Arborists with state parks removed 50-60 burned trees this AM & continue this work until immediate dangers are mitigated. pic.twitter.com/OnjBLOLAP1

While the fire just north of Skykomish has been largely contained by crews working with the U.S. Forest Service and Department of Natural Resources, “clear skies and slightly higher temperatures created a drying trend … resulting in … smoldering of vegetation,” a spokesperson for the Northwest Interagency Coordination Center wrote in an update on the Bolt Creek Fire.

Air quality in northwestern Washington suffers, and Tuesday morning the Puget Sound Clean Air Agency rated the air quality as unhealthy for sensitive groups. Conditions are expected to improve as soon as Thursday though.

Celebrity Cruises SPONSORED — A round-trip Alaska cruise from Seattle is an amazing treat for you and a loved one. Not only are you able to see and explore some of the most incredible and visually appealing natural sights on the planet, but you’re also able to relax and re-energize while aboard a luxury cruise […]
Close
Crews working to remove burned roadside trees in order to reopen US 2 at Stevens Pass by Monday