Panic and dismay over criticism, propaganda at Evergreen College 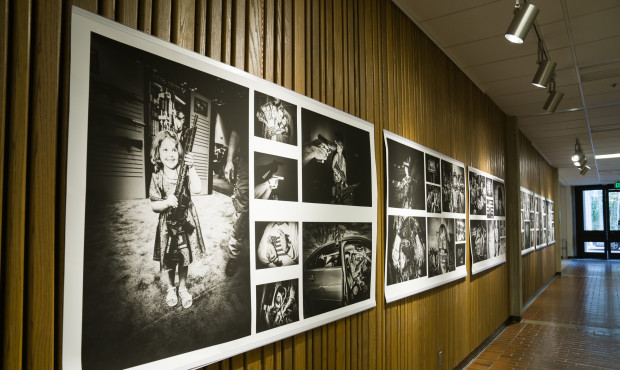 I guess I struck a nerve with Evergreen College. The school’s Interim Provost, Dr. Ken Tabbutt, emailed a warning to staff members that their emails are subject to public scrutiny.

Recently, after a tip, I discovered that artwork on display at the Olympia-based college was subject to vandalism. Despite the fact that the photographs were critical of President Donald Trump, someone decided to help destroy some of the artwork.

One staff member wondered if the art would “trigger” some students incapable of seeing an image of a candidate they didn’t vote for. In fact, I combed through many staff emails sent to a public list-serve showing panic and concern over the art. That seems to have angered Tabbutt.

Tabbutt sent out a warning email that reads like he’s trying to shield his school from embarrassment.

Last week we had a very unfortunate incident when emails sent to the All Staff & Faculty distribution list were quoted out of context by the media and specific individuals were identified.  It is an opportune time to remind us all that our emails are public records and, whether requested or not, may be distributed well beyond the campus community. The All Staff & Faculty DL is an extremely efficient method of communicating to the entire campus but when I click Send this email will go to over 1600 recipients; this includes over 700 students (student workers), 500 faculty and 400 staff.

When using email you should always understand that your message may very well travel past the confines of your intended audience and may be used out of context. Communication is critical on this campus and email is one of many mechanisms – I encourage you to think before clicking Send.

There seems to be a panic at Evergreen. Tabbutt is right to warn his staff that their words (“check your own privilege”) will get out. They should. These are adults who help shape our future leaders. We should know the influence these people are having on college students. But the panic extends to dismay and it has nothing to do with my blogs.

Over the past two weeks, I’ve received multiple complaints from listeners and readers connected to Evergreen College complaining about the school’s conduct and staff’s influence on the campus culture. Those stories will be forthcoming but I’m certain they’ll be written off by Tabbutt as misleading or, perhaps, fake news. They may not see anything wrong with treating college-aged students as snowflakes incapable of dealing with images of Trump, but I do.

More worrisome, there’s something even more wrong with the fact that some of these adults at Evergreen are helping create the campus that it’s acceptable to claim you’re being triggered by art, critical of Trump or not. It’s very Trumpian to dismiss these stories as “out of context” and “unfortunate”.

For a campus that gets triggered so easily by images of President Trump, it seems odd that Tabbutt is pulling the same “fake news” theme the president is notorious for.

With minimal travel time required and every activity under the sun, Anacortes is the perfect vacation spot for all ages.
Close
Panic and dismay over criticism, propaganda at Evergreen College