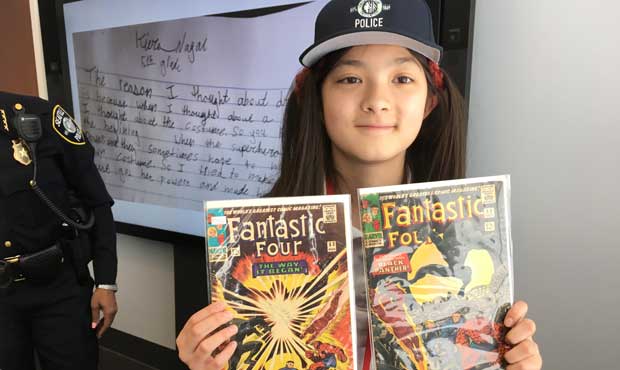 Kiera Nagai says that a superhero has to fly. And also, they have to make their own outfit.

“I drew a picture of what I think a superhero would be like. I tried my best,” she said.

RELATED: Why this Seattle cop is giving away two iconic comic books

That drawing of a superhero was randomly selected as the winner of a comic book giveaway organized by Seattle police.

On Tuesday, April 17, Officer Kevin Stuckey handed over two highly-valued Fantastic Four comic books — No. 52 and 53. The very first appearance of the Black Panther character in any comic. All participants had to do was draw a picture of what they think a superhero is.

Stuckey selected from those illustrations, and Kiera’s picture was the random winner.

“I was like, ‘Wait, really? Really?! I was so surprised,” Kiera said. “There are so many talented people, and it was me. That was really amazing for me.”

Kiera, an 11-year-old fifth grader, also included an explanation of her hero — a girl with a cape, yellow and red hair, flying across the city.

Of course, she would love the ability to fly if she was a superhero. But that’s not all.

“But also like invisibility,” she said. “So I could go downstairs in the middle of the night and go on my Xbox or something.”

The Black Panther comic book giveaway was organized by Officer Stuckey — a longtime comic book collector. Upon seeing the success of the Black Panther movie, he felt it was a good time to give away his two prized Fantastic Four comics. Stuckey says it’s a great way to have a conversation about heroes in our lives and to encourage kids to read.

“When I was 12 years old, coming up as a kid, living in New York and was in foster care, I was reading about superheroes and it took me away. It made me think about my life and that there was something else for me,” Stuckey said. “We’re talking about reading. Even if it’s not a kid, if it’s a young person, a young adult, we’re talking about giving away a book …. yes, this book has some value, but it sparks a conversation and we’re getting kids to want to read; to enter a contest to get a book.”

Snohomish Health District SPONSORED — Cheers to the parents and guardians who keep their kids safe and healthy. The dad who cooks a meal with something green in it, even though he’s tired and drive-thru burgers were tempting. The mom who calms down the little one who loudly and resolutely does NOT want to brush […]
Close
11-year-old wins 2 iconic, valuable comic books with Black Panther