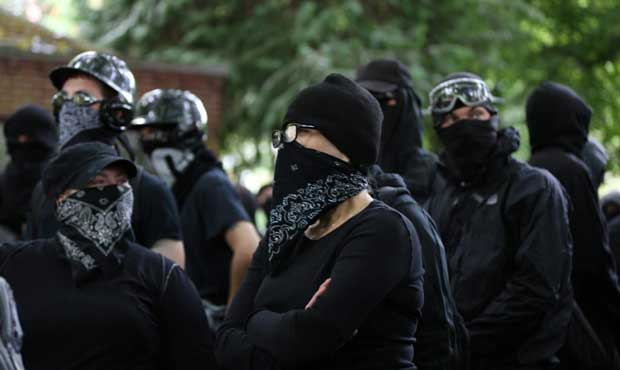 What happened in Portland this past weekend was absolutely horrifying. In Portland, Antifa is quite the force. They took over the streets downtown Portland because of a police shooting of an African-American, 26-year-old Patrick Kimmons, in Portland about a month ago.

The mob, captured in a series of videos, is unbelievable to watch. Antifa stands in the middle of the road and directs people to turn right rather than drive straight, where their mob has taken over. Portland cops are sitting in their cars all in eye shot of this, and they allow the mob to run the streets.

In one video, an older man wants to drive straight, and they tell him to turn right. He asks why. An Antifa woman tells him it’s “because I told you to.” Then the Antifa men come in and start yelling at him, calling him a “whitey” and “KKK,” swearing at him, and telling him to “go back to North Carolina.” The irony? These Antifa guys are white.

RELATED: Media treatment of Portland Antifa is proof the left has gone nuts

In a separate moment, another older gentleman is trying to go down this same street when the mob surrounds his car, hitting it with batons to the point of breaking his taillight. And again, the cops are watching all of this. This driver looks legitimately scared for his life. One Antifa guy in front of the vehicle looks like he’s either trying to lift up the hood or even lift up the front of the car. So the driver drives straight down the road, knocking the Antifa guy off his hood. The mob chases him down, hitting the car with batons. At this point, the guy gets out of his car, and while they don’t hit him with batons, they hit his car.

I watched the coverage of this on Portland TV, and the side that the media takes is unbelievable. “Police say nobody has come forward to press charges against the driver.” For driving down a road when some guy decided to jump in front of his car? What about drawing attention to the fact that Antifa is breaking the law?

This is what is happening in the most liberal of cities up and down the West Coast. We’re seeing this in Seattle, Portland, San Francisco, and Los Angeles. Police are simply de-policing. This is the sad result of cities deciding to let the mobs take over the streets. This is getting really dangerous and really scary. The Portland mayor should have been impeached yesterday. The police chief should be gone — he was afraid that having cops intervene would escalate the violence, so he had them do nothing.

That’s where we are. We’re watching innocent citizens have their property destroyed by these de-policing cities here in the Northwest.

Seattle Public Schools just announced a three-year contract with a brand-new company to the Pacific Northwest to assist with their student transportation: Zum.
Close
Dori: Portland police allowed Antifa mobs to take over the streets