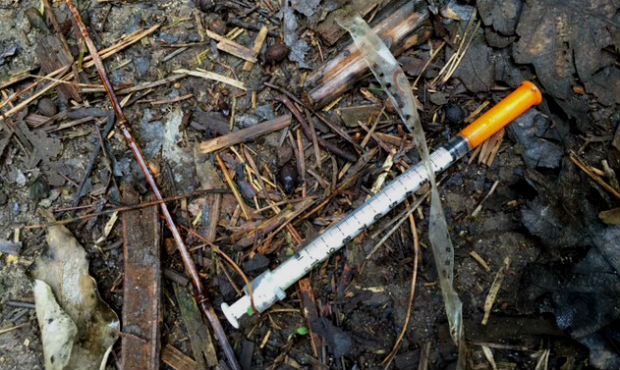 A routine trip to Northgate Mall turned Broadview resident *Jennifer’s life into a sleepless marathon of anxiety and “what ifs.”

After returning a couple of items at the mall, Jennifer was walking back out to her car in the Northgate parking lot when she accidentally dropped a few of the things she was carrying.

“I went down to grab my keys and my bag, and I felt something poke my left hand,” Jennifer told KIRO Radio’s Dori Monson. “I picked up my bags and I looked, and there I see a used syringe.”

When Jennifer examined her hand, she found that the syringe had drawn blood. She keeps a first aid kit in her car and was able to clean the wound on site.

Immediately, Jennifer drove to Harborview Medical Center to get tested for blood-borne illnesses such as Hepatitis B, Hepatitis C, and HIV.

“The first thing that went through my mind was, ‘Oh my gosh, Hepatitis B,’ because I know that’s a big thing that is transmitted through used needles,” she said. “And then of course, HIV/AIDS.”

The hospital took “many, many vials of blood” to test for a variety of infectious diseases that can be spread through unclean needles.

According to the Center for Disease Control, the chance of getting HIV after a needle stick is small, around 0.3 percent. Still, one in 300 is not zero, and can represent a tremendous source of anxiety for anyone like Jennifer who is thrown into that situation.

“You go through all the scenarios — ‘If I did contract HIV, what is life going to be like?'” Jennifer said, explaining, “When it’s such a long wait, you do kind of freak out a little bit, and it is very concerning. It’s been on my mind, and it’s really hard to remain calm and get sleep until I get these results.”

Fear and worry are not the only emotions coursing through Jennifer’s brain right now, however. She feels as though her home city has betrayed her.

“I am a little angry, because I’m a 50-year resident of Seattle, and I’ve seen my city basically go to hell … no longer is it the beautiful city I grew up in,” she said.

Jennifer said that she no longer takes her dog for walks in nearby Carkeek Park because of the needles that litter the trails and the illegal tents that can be found throughout the park.

“I don’t begrudge them for being homeless,” she emphasized. Instead, what angers her is the fact that the campers are seemingly allowed to use drugs openly, discard needles at risk to Seattle residents, and live in public spaces while refusing offers of shelter, all with no repercussions from the city.

At a recent cleanup of a 12-tent encampment by Northgate Mall — the same encampment that Jennifer suspects the needle that she encountered may have come from — all but one of the people living in the tents have refused services and shelter offered by the city’s Navigation Team.

“That’s what angers me,” Jennifer said. “That it’s just continuing on, and it’s almost like our council people are just feeding into the whole dilemma of homelessness.”

In a city with problems to the extent that a trip to the mall ended with Jennifer waiting on the results of an HIV test, she feels as though her tax dollars are being completely wasted. She is determined that “something has to change.”

*Name has been removed at personal request