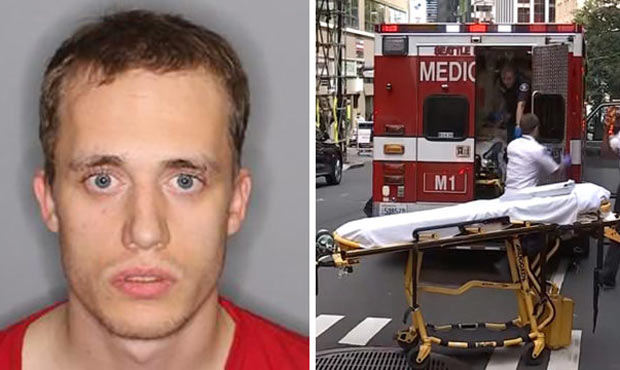 A man stabbed three people in downtown Seattle Tuesday morning, seemingly unprovoked and at random, before fleeing naked down the street as police pursued, eventually taking him into custody.

“We know he attacked three people randomly … we were able to get here quickly which is fortunate,” said Sergeant Sean Whitcomb with the Seattle Police Department.

Seattle police were called to the scene near 1617 6th Avenue at 10:07 a.m. after reports of a stabbing on the sidewalk. One victim fled into a nearby business after being stabbed. By 10:20 a.m., the suspect, an adult male, was in custody near 8th Avenue and Olive Street. He was uninjured.

He was fully clothed when the attack happened, and then removed his clothing as he fled the scene.

“The suspect was naked upon apprehension” Whitcomb said. “I don’t know what his motive was, but he is in custody and is being questioned by police.”

“We tracked him down a couple blocks away before he could hurt anyone else,” he said. “… It is a tragedy that a stabbing like this happened, but he is in custody. We have our investigators working on this case and we are going to do everything that we can with the King County Prosecuting Attorney’s Office to ensure that this suspect is charged and experiences the full weight of the law.”

Whitcomb said that the man did attempt to get rid of the weapon so investigators would not find it, but they were able to recover the knife and the suspect’s clothing in the area.

Seattle police have identified the suspect as 29-year-old Christopher Morisette. He was booked into the King County Jail for investigation of assault, as well as a Department of Corrections violation.

According to KIRO 7 TV, Morisette “has an extensive criminal history and spent time at Western State Hospital, the state’s largest psychiatric hospital.” The Department of Corrections has classified Morisette as highly violent.

KIRO 7 reports that he graduated from Bellingham High School in 2008 and has had at least 22 arrests since. There are 33 court cases on Morisette dating back to 2009, most in Whatcom County. Offenses include: assault, burglary, felony vehicle prowling, theft, malicious mischief, and trespassing. Prosecutors have noted that Morisette has been homeless, with no friends or family, and no job in King County.

Records also state that he was once arrested after trying to open the basement door of a woman’s South Seattle home; police found him with two BB guns at that time. Police described him as angry and uncooperative. After he was arrested, he was able to slip out of his handcuffs and grab a box cutter he was hiding. Later, he would tell court officials that he used “all drugs,” and suffered from “every mental illness.”

His most recent case before Tuesday involved an attack against a woman at a mental health facility in December 2018. At the time, the Seattle City Attorney’s Office asked for 90 days in jail, 24 months probation, and mental health and chemical dependency treatment. A judge ultimately sentenced him to 45 days, which included 18 days of time served.

Witness to the stabbing

Richard Johnson tells KIRO Radio that he witnessed the incident, and even spoke to the suspect at the scene before the stabbings.

“I saw a man, he had a knife, an open knife, and he appeared to be stalking down into the underground garage,” Johnson said. “It appeared to me that he was looking for somebody to stab.”

Johnson described the suspect as a “disheveled” white male with dirty blonde hair that was almost shoulder length, standing at about 5’8″. He said that the man was “creeping,” instead of walking around the entrance of the underground garage.

“I had to say something, so I said, ‘Hey, what are you doing, what’s going on man?’ He turned around with the knife opened, looked at me and said, ‘You want some of this?’ I said ‘No, I do not’ and I started backing up.”

“He then turned around and focused his attention on me and started walking up toward me,” he said. “At that time, a person walked past me from behind going toward Nordstrom. And the guy turned his attention to him and just stabbed him, right there, right in front of me. He stabbed him in the arm.”

Johnson said that he yelled after that, warning people that the man stabbed someone. He says the man then walked further up the sidewalk, about 10 feet, and stabbed a second victim.

“I think he got them pretty good,” Johnson said.

The first victim then reemerged, this time with a long traffic cone. He began fighting off the suspect with the plastic cone, Johnson said.

“He then walked across the street,” Johnson said, noting that he followed the guy, warning people about him. “He got up to the corner on Pine and there was a panhandler standing on the corner, and he walked up to him from behind, the (panhandler) had his back to him, and he stabbed him right in his side … it was four, five minutes tops for all three people to get stabbed.”

According to Johnson’s account, the suspect then crossed the street and walked toward Pike Street. That’s where he saw the suspect, in the distance, attempt to ditch the knife by throwing it into a FedEx truck.

“Then he reappeared on the sidewalk and proceeded to take off all his clothes and started screaming at the top of his lungs,” Johnson said. “And then he started running as fast as he could, up Pike Street … he was running really fast.”

Johnson said that Seattle police arrived a short time later and arrested the man. According to Johnson, the arrest happened near the Paramount Theatre.

KIRO 7 TV contributed to this article.

Correction, 7/9/19: A previous version of this article incorrectly stated that the Seattle City Attorney’s Office had asked that Christopher Morisette be sentenced to time served for a previous offense.

There are a wide variety of treatments options available for men with prostate cancer. One of the most technologically advanced treatment options in the Pacific Northwest is Stereotactic Body Radiation Therapy using the CyberKnife platform at Swedish Medical Center.
Close
Naked man arrested for Seattle stabbings has violent criminal history