All Over the Map: Topless shows and ‘The Gayway’ among ghosts of Seattle World’s Fair 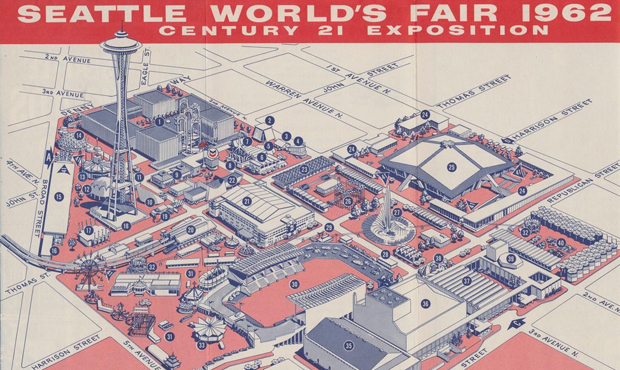 There were two World’s Fairs held in Seattle during the 20th century: One in 1962 at Seattle Center, but also in 1909 on the University of Washington campus. What’s a little unusual about both of them is that they were designed in such a way so that when the fair was over, some of the buildings and other infrastructure remained to serve the local population for decades after the fact.

But this installment of All Over The Map isn’t about the obvious World’s Fair leftovers like the Space Needle or the Monorail. This story is about some of the things that were only temporary, and what’s in their place now.

Seattle Center was home to “Century 21,” the World’s Fair that took place from April to October 1962. Several buildings and places around the old fairgrounds are still being used basically the same way they were during the fair. Others are gone, and others still have been re-purposed.

The buildings that house KEXP’s incredible radio station and performance space on the corner of First Avenue North and Republican were home to some of the international exhibits that were part of the 1962 fair.

In those specific structures – remodeled by KEXP – were exhibits produced by the European Economic Community, Brazil, and the United Arab Republic.

Where the Seattle Rep’s Bagley Wright Theatre now stands near Mercer and 2nd Avenue North was an open plaza called the International Mall. Along the edges of the plaza were buildings housing exhibits from Korea, India, United Nations, Thailand and the Philippines, as well as several African countries.

Here also was one end of the Union 76 Skyride, an overhead cable car, not unlike a ski lift, that carried fair-goers several feet above the ground on a scenic journey across the fair, including a very close brush with the International Fountain. The other end of the Skyride was over by the monorail station, adjacent to where MoPop is now.

That Skyride made its final run on September 30, 1979, and by the next year, it had been moved to make way for the new theater.

But it wasn’t entirely gone; the cables and cars were reinstalled in time to be ready in September for the 1980 edition of what was then called the Puyallup Fair, and the Skyride is still in service nearly 40 years later.

An earlier plan in 1979 had called for the Skyride to remain at Seattle Center, but to run down Broad Street all the way to Pier 70. This plan was actually endorsed by the Seattle Design Commission, who suggested a combined ticket be offered for the Monorail, Skyride, and waterfront street car. It’s unclear why this plan fell through, and it’s a shame, as it would’ve been a fun ride.

The KCTS Public Television building and grounds on the corner of Mercer and 5th Avenue were built in an area that, during the fair, was called “Show Street” (earlier known as “Sin Street,” according to some sources).

This section of the fair featured a number of “adult” attractions. Entertainer and entrepreneur Gracie Hansen created and ran Paradise International, which was essentially a strip club with topless women performers, and was roughly where the plaza in front of KCTS and the KCTS lobby is now.

Right next door and to the southwest from Paradise International was another topless attraction called “Girls of the Galaxy,” and, nearby, yet another topless show called “Peep Backstage, USA.”

Another attraction on Show Street was “Les Poupées de Paris.” This was an adult-themed puppet show – with, you guessed it, topless puppets – produced by Sid and Marty Krofft. The Krofft brothers would later go on to international success with “H.R. Pufnstuf,” “Sigmund and the Sea Monsters,” and other Saturday morning television delights.

Not far from KCTS on the south side of Memorial Stadium, a playground was recently built to replace the “Fun Forest” amusement area, which featured carnival rides and games and which had been created after the fair in 1963. During the fair, the amusement area was called “The Gayway.”

Seattle’s Gayway wasn’t the first of its kind. The San Francisco World’s Fair in 1939 chose this name for its own amusement area (which mixed adult entertainment in with the carnival attractions) through a contest. In Vancouver, BC, the Pacific National Exposition — or the “PNE” — was using the “Gayway” name for their carnival area in the early 1950s.

The UW campus was the site in 1909 of the Alaska Yukon Pacific Exposition (or “AYPE”), which celebrated the positive impact on Seattle of the Yukon Gold Rush, and Seattle’s ties to Asia.

The main legacy remaining from the AYPE is the layout of campus. The UW had moved to that site from downtown in 1895. It was a pretty sleepy and bucolic place until the AYPE came along, and John Charles Olmsted was hired to create a site and landscaping plan to accommodate dozens of mostly temporary buildings.

Only a few tangible things remain from the AYPE, including what’s now known as the Drumheller Fountain and Frosh Pond. This was the Geyser Basin during the 1909 fair, and was the perfect foreground for looking to the southeast to see Mount Rainier, or what is still officially called “Rainier Vista,” though few use that name anymore.

The Architecture Building (near the campus entrance off of Campus Parkway at 15th Avenue Northeast) is the only grand building from the AYPE still standing; it was the “Fine Arts Building” during the fair.

The AYPE had an amusement area, of course, though there’s nothing left of it now. It was called “The Pay Streak,” which was a nod to prospecting and mining, and refers to the strata within rock that contains valuable ore such as gold or silver.

The Pay Streak was along the edge of campus, east of 15th Avenue on both the north and south side of what’s now Pacific Street, including part of what’s now the UW Medical Center. Amusements included rides and games, as well as a gravity powered contraption called “The Tickler,” that looks suspiciously like an early version of the Tilt-a-Whirl.

And though Gracie Hansen’s Paradise International strip show is long-gone from the KCTS lobby, the concrete building that housed the dancers and patrons was moved to Ravensdale by King County Parks decades ago. For the past 30 years, it’s been home to the Gracie Hansen Community Center.

With minimal travel time required and every activity under the sun, Anacortes is the perfect vacation spot for all ages.
Close
All Over the Map: Topless shows and ‘The Gayway’ among ghosts of Seattle World’s Fair