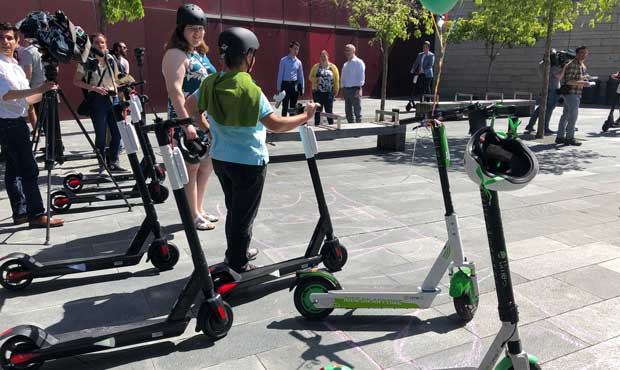 Lime, one of Seattle’s bikeshare providers, is drumming up support to send a message to the City Council: Allow scooters in the city.

Seattle is one of a handful of neighboring cities which does not allow scootershare. Tacoma, White Center, and Bothell all have scooters, to name a few. But Seattle has been hesitant to allow the form of transportation. Seattle Mayor Jenny Durkan has said she supports allowing scooters in the city at some point, but she wants to “do it right.” Generally in Seattle speak, that means committees, meetings, and pilot programs.

‘Bikeshare fading slowly into sunset’ with arrival of e-scooters

That further means Seattleites will have to wait for scootershare. That’s not fast enough for Lime. Many Lime customers received text messages Monday, in an attempt to flood Seattle City Hall with scooter supporters:

The Seattle Department of Transportation will present its plan to bring scooter sharing to the City Council on September 24.

If you can attend the meeting and give a public comment in support of bringing scooters to Seattle in 2019, before Seattle Squeeze 2.0, please RSVP and we will share more details.

Upon RSVPing for the SDOT meeting, Lime sent a followup message noting that the meeting is at noon at Seattle City Hall.

Update: The Seattle Department of Transportation notes that it is not giving a presentation at the council committee meeting, rather Micromobility Coalition will provide a 10 minute presentation. The presentation is expected to be about micromobility, including e-scooters and e-bikes. According to a City Council spokesperson, “The coalition is more of an industry group.”

This is the second such push that Lime has organized in an effort to speed up scooter adoption in Seattle. In August, customers received another text message asking them to write their councilmembers to encourage them to support scooters. Lime even created an online form for customers to use, helping facilitate the mass email campaign.

The ultimate goal for Lime is to bring e-scooters to Seattle in 2019, ahead of what it (and others) calls the “Seattle Squeeze 2.0.” In January, the region will experience construction on various transportation routes.

There will also be disruptions to light rail routes over the first 10 weeks of 2020. Tolling in the new SR 99 tunnel will also begin, which is expected to push cars onto the city’s surface streets. This is expected to all add up to significant traffic congestion.

Be prepared for 10 weeks of light rail disruptions in 2020

Lime hopes to build off its bikeshare success in Seattle with scooters. In 2018, there were more than 2.1 million trips taken on bikeshare in in the city. This comes shortly after news that Lime is shuttering one of its other offerings in Seattle, LimePod.

LimePod is a car-sharing service using the same app as its bikeshare. The service was active in Seattle for less than a year. The cars are expected to roll out of Seattle in October. Lime says that it is ending LimePod because it could not find an electric car option for the service. It had always intended to replace the Fiats it uses for LimePod with electric vehicles.

It’s worth noting that one of Seattle’s former bikeshare companies, SPIN, pulled out of Seattle over the city’s reluctance to allow scooters. Spin was among the first and only companies to take part in Seattle’s bikeshare pilot program for more than a year. But in August 2019, it pulled out of the city. In a statement, it explained a handful of reasons for leaving town:

As SDOT formulated the new permit rules, we had hoped the requirements would allow scooters. We also expressed our concerns about the proposed requirement that all operators pay a flat fee of $250,000. We believe fees should be variable based on an operator’s fleet size, and not an arbitrarily high flat fee, with fleet expansions determined by performance. In fact, we note that every U.S. city that has adopted rules for dockless mobility operations bases fees on the operator’s actual fleet size, including Seattle until now.

Unfortunately, the City will not be allowing scooters in the new permit at this time. We were also disappointed that the City left the flat fee unchanged in the final version of the new permit requirements. In light of these realities, Spin has made the difficult decision to not apply for the bikeshare permit. Nevertheless, we intend to continue working with the City to offer our shared scooters to Seattleites soon.