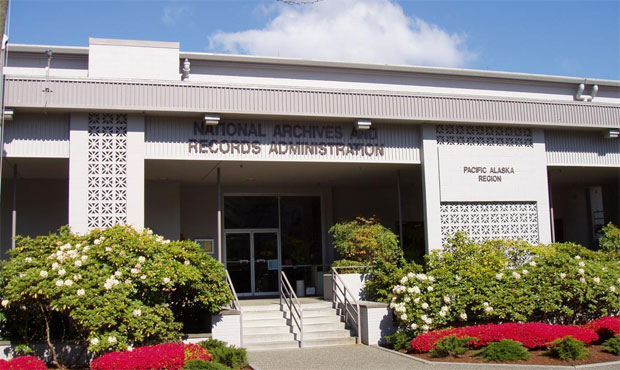 A compromise brokered by State Attorney General Bob Ferguson might keep the regional facility of the National Archives here in Washington – if not necessarily in Seattle – after all.

In February, Ferguson threatened to sue the federal government if the Office of Management and Budget didn’t reverse its abrupt decision — without public or other stakeholder input — to close the National Archives in Seattle’s Sand Point neighborhood, sell the building, and move regional historical materials to California and other federal administrative records to Missouri.

The Seattle facility had been targeted for closure and sale as an “under-utilized” and “high-value asset” by an obscure federal agency called the Public Buildings Reform Board.

On March 5, Ferguson sent a letter to Office of Management and Budget Director Russell Vought seeking a compromise that would allow the sale of the building and 10-acre parcel to go forward, but that would co-locate the materials – priceless photos, documents and maps related to the history of Washington, Oregon, Idaho and Alaska – in an existing state or other archival facility.

In response to Ferguson’s letter, a preliminary meeting took place last week between his staff and representatives of the National Archives and Records Administration (NARA) to explore other options besides moving those materials out of state. Ferguson then sent a follow-up letter on Monday, March 23 seeking specific details about NARA’s space and other storage requirements.

Late Monday, Ferguson told KIRO Radio that once he has more information from NARA, he hopes to make a formal proposal to the federal government sometime in April, but that this timeline may change given the challenges created by the COVID-19 outbreak.

“A lot’s going on with, obviously, a public health crisis right now, so I want to cut a little slack to other governmental agencies,” Ferguson said. “But my hope is they’ll respond to our most recent short letter asking for information relatively soon, because that will help us craft a proposal.”

The proposal, which Ferguson acknowledges is only in a preliminary stage, would require a commitment for federal funding to build a new facility or to expand an existing one, perhaps managed by a state or other agency already caring for archival materials.

The facility would also require federal funding for ongoing support for staffing and operations as well. Ferguson says a portion of the proceeds from the sale of the Sand Point facility and a dozen or so other federal properties would fund what he has in mind.

One possible location mentioned in Ferguson’s March 5 letter is Olympia, where the Washington State Archives are housed, and where current plans call for renovation and expansion of the state facility.

Under Ferguson’s preliminary proposal, other non-historical federal materials also currently stored at Sand Point – and generally of little interest to historians, tribes, genealogists, and other National Archives patrons – would still be allowed to be moved by NARA to Missouri.

The Attorney General said that he remains committed to keeping the archival materials in Washington. While he’s hopeful a solution can be achieved without going to court, Ferguson has not ruled out legal action should compromise efforts fail.

“The complaint is certainly ready to go, and I’m quite serious that if I feel the negotiations are not moving in the direction that I feel are necessary, I will not hesitate to file that lawsuit,” Ferguson said.