All Over The Map: New search for DB Cooper clues along Columbia River’s Tena Bar 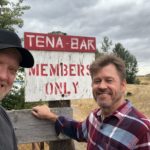 A new search is underway at the spot along the Columbia River called “Tena Bar,” where money from hijacker D.B. Cooper turned up 41 years ago. But, just like the infamous airborne criminal, the origins of the name “Tena Bar” remain something of a mystery, too.

Nov. 24, 2021, will mark the 50th anniversary of the infamous Thanksgiving Eve hijacking of a Portland-to-Seattle Northwest Airlines’ Boeing 727 jetliner. KIRO Radio has planned a series of stories as the anniversary approaches, exploring various aspects of the now legendary event in Pacific Northwest history. As it did in 1971, Thanksgiving Eve this year also falls on Nov. 24.

The crime was never solved, and D.B. Cooper – or whoever it really was who boarded Flight 305 in Portland and then claimed to have a bomb in his briefcase – was never identified. On the ground in Seattle, Cooper exchanged the 36 passengers for $200,000 and four parachutes, and then left in that same jetliner, headed south, with just the flight crew and one flight attendant aboard.

Cooper then opened the rear stairs – a feature unique to the 727 model – and parachuted from 10,000 feet into the dark, windy, and stormy November night somewhere over Southwest Washington. Authorities searched where they thought Cooper might have landed, but nothing turned up. For decades, D.B. Cooper has occupied the realm of UFOs and Sasquatch in terms of being an iconic, if felonious, piece of Northwest mythology.

In February 1980, a kid named Brian Ingram was digging in the sand along the Columbia River near Vancouver, Washington, at a place called Tena Bar. There, along the bank, he found about $6,000 in $20 bills, or just a fraction of the cash that Cooper had been given in Seattle.

Still, discovery of the cash nearly nine years after the hijacking was front page news, and it renewed hopes for solving the crime, or at least identifying a suspect. But, because none of the other Cooper dollars had ever been found in circulation, the FBI and others had long speculated that Cooper didn’t survive the jump. The FBI believed the money had likely floated to Tena Bar sometime after the hijacking, washed up on the shore, and then was gradually and naturally covered with sand.

The discovery also forced a rethinking of where Cooper, dead or alive, and the cash were believed to have landed.

It was originally thought he had likely landed in an area drained by the Lewis River — and that’s where the search was concentrated in the days following the hijacking, in and around the small town of Ariel, east of I-5 and not far from Woodland. However, because the cash was found in the Columbia River at a location upriver from where the Lewis River enters the Columbia, this meant that Cooper, more likely, landed in an area drained by the Washougal River — which is farther east than was originally thought and farther east of where the original search was concentrated. That’s a pretty important point.

The February 1980 cash discovery at Tena Bar is news again because a D.B. Cooper historian named Eric Ulis has begun a multi-week effort to excavate that site along the Columbia River to try and find Cooper’s parachute and briefcase.

When KIRO Radio spoke with Ulis earlier this week, he described the 13 years of research he’s done regarding the Cooper case, and the conclusions he’s drawn about what happened at Tena Bar nearly 50 years ago.

“The evidence is absolutely clear that the money was buried by human intervention,” Ulis told KIRO Radio. “And if it was a human being that buried the money, well, in all likelihood it was probably D.B. Cooper.”

Ulis believes Cooper landed nearby, and then intentionally buried the parachute, briefcase, and the cash – and that Cooper intended to come back later to get the money.

Because Ulis lives in Phoenix, he’ll be traveling to back and forth from Arizona to Tena Bar for one or two day visits to conduct a thorough excavation in search of the artifacts; he doesn’t believe any cash remains there. Ulis estimates he’ll spend a total of about eight days along the river between now and October.

Tena Bar is a long sand bar that was a popular local fishing spot for decades. It’s not a public park, and the landowner – the adjacent business, Fazio Bros Sand, Inc. – in the past was fairly permissive about anybody fishing there. The area is now officially off limits, but Ulis has permission from the Fazio family to conduct his search there.

Origins of the name “Tena Bar” – pronounced like “Tina Bar” – are hard to narrow down. Eric Ulis says the name comes from a previous owner of the land. Earlier newspaper articles and books about D.B. Cooper call the spot “Tena’s Bar” with a possessive apostrophe and an ‘s.’ In Chinook jargon, the trading language spoken in the Northwest among different Indigenous groups and European traders beginning in the 19th century, the word “tenas” – pronounced “TEN-ass” – means the noun “child” or the adjectives “little” or “small.” An online search shows that there are many places in the Northwest called Tenas Creek or Tenas Lake, so Tenas Bar may not be much of a stretch.

Perhaps, then, the correct name for where Ulis is searching is actually Tenas Bar – though we might never know for sure about that, or, for that matter, about D.B. Cooper.

There are a wide variety of treatments options available for men with prostate cancer. One of the most technologically advanced treatment options in the Pacific Northwest is Stereotactic Body Radiation Therapy using the CyberKnife platform at Swedish Medical Center.
Close
All Over The Map: New search for DB Cooper clues along Columbia River’s Tena Bar