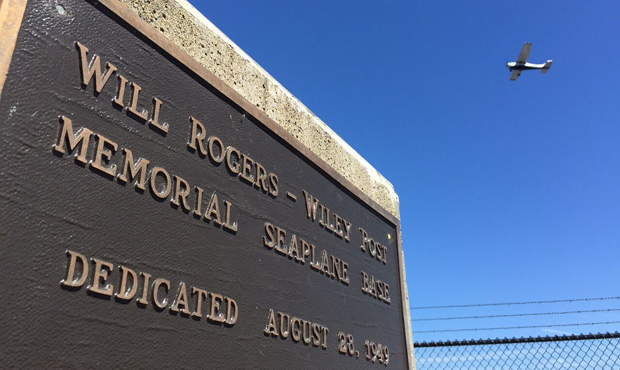 A monument to aviator Wiley Post and humorist Will Rogers was dedicated in 1949 in Renton. The pair departed from here in 1935 on an ultimately fatal trip to Al aska. (Photo by Feliks Banel)
LISTEN: Will Rogers’ deadly journey began in Renton
Share

The ghosts of two nearly forgotten aviators haunt Seattle. But you have to know where to look, from Renton to Lake City to Georgetown, to find any reminders of the two men.

The best place to start is the north end of Renton Municipal Airport, at the public viewing area by the seaplane terminal off of Rainier Avenue. A monument here commemorates the loss 81 years ago this week of one of the most famous pilots of the early 1930s and one of America’s foremost humorists of the pre-World War II era.

Wiley Post and Will Rogers were famous Oklahomans who became friends through their mutual love of flying. The two set out from Lake Washington near Renton in a pontoon-equipped Lockheed plane on August 7, 1935. They headed north through Canada and Alaska on the first leg of what was supposed to be pleasurable trip, with perhaps a little aviation business thrown in.

Photos: Will Rogers’ final flight out of Renton

Several days later, the pair was 15 miles from Point Barrow in the northernmost area of what was then Alaska Territory when they had to set down on the water near a native village. When they attempted to take off the next day, the plane crashed. Both men were killed.

Word of the crash reached Point Barrow within hours, and then spread via telegraph to the Lower 48. The bad news was everywhere, on the front pages of newspapers and in movie theater newsreels across the United States.

Will Rogers, 55, was famous for his optimistic and folksy humor and political aphorisms, and is perhaps best remembered for having claimed, “I never met a man I didn’t like.”

He was a writer and radio performer, and appeared in Hollywood films. Before that, he had starred in vaudeville, delivering news-based monologues while dressed as a cowboy and nonchalantly twirling a rope. Rogers was also a favorite of President Franklin D. Roosevelt.

Wiley Post, 36, was a well-known aviator, perhaps second in fame in those years to only Charles Lindbergh. Post held records for speed and altitude, and was the first pilot to fly solo around the world. He also developed an early version of a pressurized suit for high-altitude flying.

After the Alaska crash, the bodies of the two famous and beloved men were retrieved with help from Native Americans and were flown by fellow aviators back to Seattle. Hundreds gathered on Monday, August 19, 1935 to greet the plane as it landed at what’s now Boeing Field.

The aircraft was quickly moved into a hangar and the giant doors closed for privacy. The remains of the two crash victims were then transferred to another aircraft for a flight south. Rogers was buried in Burbank, California; Post was buried in Oklahoma City.

As their families, friends and the rest of the world mourned the two men, there was some controversy over what might have caused the crash. Post had sought to have pontoons installed on his plane by Lockheed in California, but they refused. He instead had pontoons installed in Renton by a company called Northwest Air Service. The pontoons’ weight and shape may have affected the aerodynamics and handling of the plane, but others have speculated that low fuel in one of the aircraft’s tanks caused the engine to stall, and Post was unable to recover in time.

According to an aviation website, Post’s plane was a one-of-a-kind aircraft, described as “a hybrid plane built from two wrecks . . . the low-wing monoplane consisted of a Lockheed Orion fuselage and long wings from a Lockheed Explorer.”

Though the men had spent only a short time in Seattle before heading north to Alaska, the two must have made an impression, or perhaps the tragic nature of their deaths inspired locals to take action. Either way, there were multiple efforts to create lasting memorials here in the years after the crash.

The monument to Post and Rogers at the Renton airport was dedicated on August 28, 1949 and originally consisted of a brass plaque on a large boulder. According to newspaper accounts, Governor Arthur B. Langlie was on hand for the program, which also included a beauty contest, a model airplane exhibition, and at least one water skier towed behind an airplane. The plaque was rededicated and mounted on a concrete obelisk in August 2003.

At least two other monuments solely to Will Rogers were dedicated in Seattle after his untimely death.

One is now next to the Lake City Branch of the Seattle Public Library. But it didn’t start out there.

It was first dedicated at the long-gone Olympic Riding and Driving Academy at 17th Avenue NE and NE 137th, where Rogers played a final game of polo before departing for Alaska. The elaborate concrete obelisk with bronze relief of Rogers’ profile was created by noted local sculptor Alonzo Victor Lewis.

On this field Will Rogers took his last ride. Shrines erected by the world will commemorate his passing, but none could be more hallowed than this little patch of ground where the kindly, chuckling, hard-riding cowboy played his last game of polo before he went roaring to his last round-up. We still hear his cheery haloo as with broad grin on weather-lined face he urged his pony into the thick of play. To the spirit of a mighty adventurer, hail and farewell.

The monument, which also features a life-sized bronze polo helmet and polo mallet, was moved back in the 1960s from the site of the old polo field to the parking lot of the library. It was moved again and rededicated in 2005 when the library was renovated.

Another Rogers memorial purportedly was dedicated at the main terminal at Boeing Field, the airport where the bodies of Post and Rogers returned from Alaska, but specific details are hard to come by. A newspaper article from the 1960s seems to indicate it may have only been on display for a short time.

A search around Boeing Field this week, along with impromptu inquiries to airport officials, airline employees and a custodian, proved unsuccessful. However, a “little patch of ground” out in front of the terminal building does include some other fascinating monuments to the airport’s origins, and to the early settlers upon whose land the aviation hub was built.

Perhaps the Boeing Field Will Rogers plaque, like the man who inspired it, has gone “roaring to its last round-up.”

Lake Washington Windows & Doors SPONSORED — Fiberglass windows are an excellent choice for window replacement due to their fundamental strength and durability. There is no other type of window that lasts as long as fiberglass; so why go with anything else? Fiberglass windows are 8x stronger than vinyl, lower maintenance than wood, more thermally […]
Close
Will Rogers’ deadly journey began in Renton