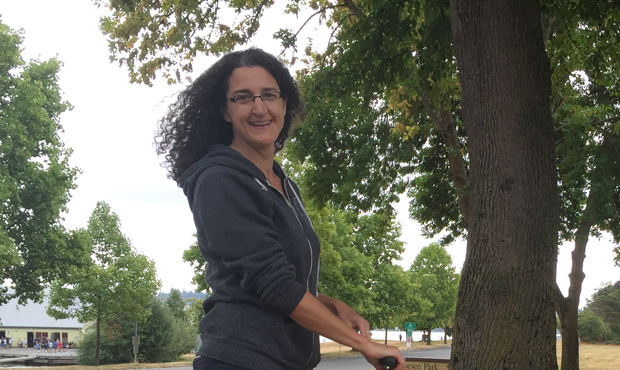 You’d never know that Lake Washington was once much bigger than it is nowadays.

But thanks to the efforts of a local historian and artist, you might get an idea this Sunday of how a small part of the original shoreline looked 100 years ago.

Mikala Woodward heard the story of the shrinking lake a long time ago, and it stuck with her. Now she’s about to take a three-mile hike, pushing an athletic “field chalker,” designed for marking football and other playfields, through south Seattle. Her goal is to recreate, in a four-inch strip of light-blue chalk, a portion of Lake Washington’s phantom shoreline.

When the Montlake Cut opened a century ago this summer as part of the government’s effort to connect Puget Sound and Lake Washington for commerce, the lake level dropped about nine feet. Within a few months, what had once been the shore was, in many cases, far from the lake.

The vision for connecting Seattle’s salt and freshwater goes back to the 1850s, and once it happened, Lake Washington was changed forever by the shifted shoreline and the industry that blossomed alongside. A connection to the Pacific Ocean through the locks, ship canal, and Montlake Cut meant shipyards in Houghton, a Navy base at what’s now Magnuson Park, winter storage in Bellevue for the whaling fleet, and lumber mills and concrete plants from Kenmore to Renton.

“I imagined what that would have been like, and all the places around the lake that probably didn’t have much of a say in that,” Woodward said. “What did they think when their docks were left high and dry? Or their shingle mills?”

As a historian and educator for most of her career, Woodward has often found herself coming up with creative ways to represent things that were no longer visible, such as houses that once stood where a playground was built, or a long-ago rerouted creek bed.

“I always imagined it would be really cool if all around the lake and all the places that were affected, there was a way to show [the old shoreline],” Woodward said. “And I thought, ‘Well maybe on the 100th anniversary we’ll think of doing that.’”

Fast-forward about a decade to one day in 2011 when Woodward was on a visit to the Hiram S. Chittenden Locks in Ballard. That’s when fate intervened.

“This woman came out of the visitor center and put this sandwich board on the sidewalk that said, ‘Today is the 100th anniversary of the first shovel of dirt [for the construction of the locks],’” Woodward said. “And I was like, ‘Oh, this person is my soul mate.’”

That person turned out to be Susan Connole, who works for a group called Friends of the Ballard Locks. Connole encouraged Woodward to pursue her interest in telling the story by reviving the old lakeshore. The two have since collaborated on coordinating a larger, community-wide observance of the centennial through a project call “Making the Cut 100.”

Earlier this year, Woodward was awarded a grant from 4Culture to purchase the field chalker and enough chalk to do the job, as well as funds to produce a short video about the project.

“[She] does the future shoreline in chalk as a climate change awareness piece. So she goes around Manhattan with this chalk hopper drawing this line,” Woodward said. Woodward consulted with Mosher about technique and other phantom shoreline tips.

Woodward’s decidedly less urban journey, officially called “Drawing the Line: A Temporary Tracing of Lake Washington’s Historical Shoreline,” will begin at Genesee Park near what used to be Wetmore Slough, across the street from the Mount Baker Rowing and Sailing Center. She’ll begin around 10:00 am on Sunday, August 28 heading south on a route devised with help from scientists at the University of Washington. The final destination is Seward Park.

She estimates she’ll need about 1,200 pounds of chalk, dyed light blue with tempera, to get the job done. Since the field chalker only holds about 50 pounds of chalk at a time, Woodward will have a team of volunteers helping out along the route of the phantom shoreline.

Related: It’s not officially a nude beach, but that’s not stopping nudists

“I’ve got seven stations along the way where I’ll have extra supplies and people planted with information about the project, so if somebody’s wondering what the heck is the line I’ll have brochure and photographs and a map for people to look at along the way,” Woodward said.

Though much of the old lakeshore is on public land, Woodward did have to get permission from several landowners along the route to roll the field chalker across private property.

“I had to go around and check with people, ‘Is it okay to draw a line through your yard?’ I had a couple of people who just were like, ‘Don’t knock on my door, go away, go away,’ before I even got to ask them,” Woodward said. “But mostly people were like, ‘Yeah, that’s interesting, sure. Sounds cool.’”

There are a wide variety of treatments options available for men with prostate cancer. One of the most technologically advanced treatment options in the Pacific Northwest is Stereotactic Body Radiation Therapy using the CyberKnife platform at Swedish Medical Center.
Close
Reviving Lake Washington’s phantom shoreline