The vanishing lanes of ‘Victory Way’ 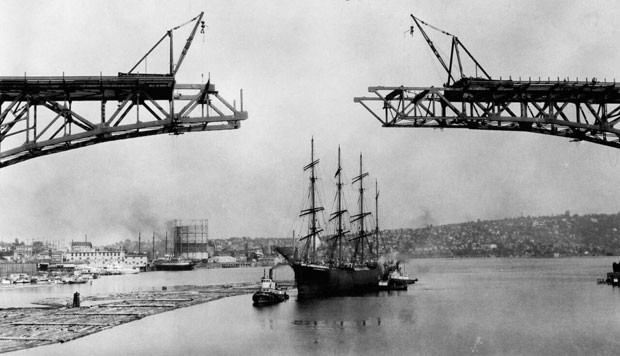 The Aurora Bridge across Lake Union was dedicated 85 years ago today, on the bicentennial of Revolutionary War hero and first president George Washington’s birth. That’s why the span is officially known as the “George Washington Memorial Bridge,” even though that name hasn’t really stuck.

On the afternoon of Feb. 22, 1932, crowds gathered at both ends of the bridge. Instead of cutting a ribbon, dignitaries sawed through a log. At the appointed moment, President Hoover pressed a gold telegraph key and officially dedicated the new span.

And though the bridge, which carries tens of thousands of cars each day via SR-99, is celebrating a birthday today, don’t expect free cake, or any banners or balloons along the guardrails. That would be distracting to drivers. And, according to Rick Rodda, superintendent of bridge maintenance for the Washington State Department of Transportation’s Northwest Region, it’s not quite time to really celebrate the bridge, whatever name you call it.

“I didn’t know [about the anniversary], wasn’t even thinking about it, and I don’t think that’s on anybody’s radar,” Rodda said late last week. “Maybe they’ll do something at a hundred.”

If you can’t wait 15 years to celebrate local transportation milestones, a little-known aspect of Aurora Bridge pre-history is directly related to the centennial of the United States’ involvement in what’s now known as World War I.

In 1919, just months after World War I ended, there was a national movement to create tree-lined “Roads of Remembrance” to honor the sacrifices of veterans and celebrate the Allied victory. The American Forestry Council encouraged Americans to act in their own communities to create new roads and, of course, line them with seedlings. Around the same time, Secretary of War Newton D. Baker ordered hundreds of pieces surplus engineering and construction equipment, just brought back from battlefields of France, distributed to cities around the country free of charge.

In those years long before the interstate freeway system, the Pacific Highway was the main north-south road running through Washington, Oregon, and California, and connecting Canada and Mexico for travel and commerce. But long stretches of it weren’t even paved.

In the Seattle area, busy Aurora Avenue was far in the future, and so was that high bridge from Fremont to Queen Anne. To go north from Seattle, drivers had to take a crude highway known locally then as the “Bothell Road,” through Lake Forest Park to Bothell, and then head north from there to Everett.

To get to the Bothell Road from downtown, drivers took a long and indirect route on surface streets: Stewart Street to Eastlake Avenue; Eastlake Avenue to the University Bridge; and then 20th Avenue north to 85th Street to connect with the old highway to Bothell.

This early “Bothell Road” is not to be confused with the modern Bothell Way; the old route was a treacherous, unpaved country road, mostly east of what’s now State Route 522. Even so, Bothell Road was popular on weekends. As far back in 1919, King County engineers counted as many as 10,000 cars a day using the road.

Also in that year of 1919, the Washington State Highway Commission and King County began planning to replace the Bothell Road with a new modern highway — following a mostly new route from Seattle to an already-paved brick road at Lake Forest Park. This new route would include five miles of new state-funded road through what was then unincorporated King County, and about a mile of City of Seattle roadway within the old city limits at 85th Street around 15th Avenue.

King County was asked by several local residents to name the new road in commemoration of the recently concluded war, and so they sent a letter to the Highway Commission.

This part gets a little complicated, but they tried to get the new Bothell Road – from 85th all the way to the Snohomish County line – officially designated by the State of Washington as “Victory Highway.” But the state declined; they had already designated the route as part of the interstate Pacific Highway. But state officials told county officials, in effect, that the road could be named whatever they wished within King County. In Seattle, the short portion of the road within the city limits was actually officially named “Victory Way,” but this stretch was less than a mile in length.

After a few years of delays caused by grading and paving issues, the big new and modern concrete road opened in early October 1922. For some reason, while it lacked official state recognition, the “Victory Way” name ended up being applied by newspapers and the public to the whole stretch of road, from what’s now about 75th and Roosevelt, all the way to Lake Forest Park. Maybe all those World War I veterans who were still around in those days had something to do with it.

Just after Victory Way opened, an editorial in The Seattle Times praised the new road and recognized its critical role in improving local and regional transportation.

“Today, the Pacific Highway in this state is a fact . . . Victory Way constitutes the connecting link in King County. It is a splendid road and one that will serve an increasing volume of traffic with passage of the years.”

This “splendid road” is also the reason that the neighborhood, playground and community center east of Northgate and west of Lake City are all called Victory Heights. The 424 building lots there were announced in May 1920 while the new highway was under construction. Prices ranged from $850 to $2,100 an acre.

But even after all that praise for its function and all that grassroots embrace of its name, Victory Way’s status as “connecting link” of the Pacific Highway lasted less than a decade.

In the late 1920s, a new and more direct route was created for Pacific Highway traffic in Seattle. Northbound traffic was rerouted from Eastlake over to Westlake; across the Ship Canal via Fremont Bridge; north on Stone Way and up and around the west side of Green Lake. Still, Victory Way remained a decent alternate route for northbound traffic, and a direct path to northeast King County and north to Stevens Pass.

When the Aurora Bridge opened less than a decade after Victory Way, it carried a new and expanded highway that connected directly to US Highway 99 all the way to the Canadian border at Blaine. The new highway revolutionized vehicle travel north of the city, and it remarkably remains nearly unaltered from its original design. South of the Aurora Bridge – for some reason – it would take nearly two more decades for the Alaskan Way Viaduct to do the same to modernize vehicle travel south of and through the city.

Even with the Aurora Bridge carrying the bulk of north-south traffic, Victory Way wasn’t quite forgotten. Yet.

Searching through the archives of The Seattle Times, the Victory Way name starts to fade away by the late 1930s, with the roadway becoming more commonly known as a variant of its original name: Bothell Way. The City of Seattle annual “traffic flow” maps keep “Victory Way” the name alive until 1949 before they, too, call that short portion of the road within the city limits “Bothell Way” (and that stretch became “Lake City Way” in 1967). Back in January 1964, the State of Washington began calling the whole thing – from Interstate 5 to points east – Highway 522.

With the World War I centennial later this year and the centennial of the Armistice in November 2018, it might be worth it for the community to consider reviving the spirit and even the name of “Victory Way” in the form of simple, tasteful commemorative signage at a few key intersections along SR-522.

Who knows? Maybe this time, the name will stick.

There are a wide variety of treatments options available for men with prostate cancer. One of the most technologically advanced treatment options in the Pacific Northwest is Stereotactic Body Radiation Therapy using the CyberKnife platform at Swedish Medical Center.
Close
The vanishing lanes of ‘Victory Way’