The childhood, family, and faith behind Seahawk Russell Wilson 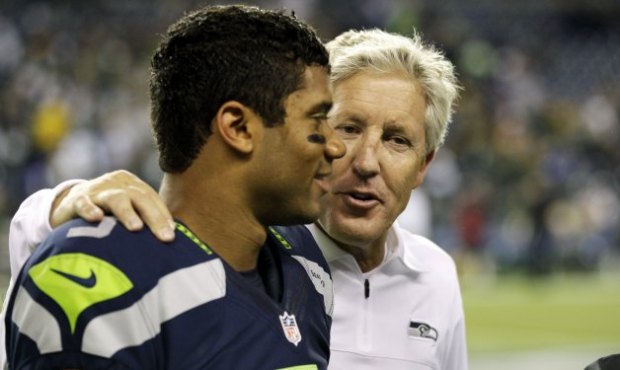 As the Seahawks get ready to play the Atlanta Falcons this weekend, New York Times statistician Nate Silver picks the Patriots and Seahawks for the Super Bowl. Silver correctly predicted the outcome of every state race in the recent Presidential election, and has a baseball stats background to boot. (AP photo)
(AP photo)
LISTEN:
Share

In a way, Seahawks quarterback Russell Wilson started calling plays when he was in fourth grade.

Whenever there was a rainy-day recess and the students had to stay inside to play, he directed the other kids in play – to the dismay of his teacher.

“They’d have a game or something they’d be playing and Russell would sit in the rocking chair and the other kids would be on the floor and he’d kind of run the game,” says Russell’s mom, Tammy Wilson. “His teacher said he was a little aggressive or assertive. I think he was a leader then.”

Tammy, like most moms, is proud of her son.

“I always knew he was going to do something great, something special, because he’s a special kid,” she says.

Russell grew up in a close family in Richmond, Virginia with his dad Harrison Wilson III, his older brother Harry, and his younger sister Anna.

He spent every moment he could playing sports – especially basketball – with his big brother.

“Russell couldn’t beat Harry, and he’d come inside and say, ‘Mom, mom, Harry’s doing such and such,’ and I’d say ‘Russell if you can’t handle it, then maybe you need to stay inside,'” she recalls. “He’d pout, ‘No, no, no, I’m going back out there.’ I think his brother really helped him to be tough because Harry wouldn’t just let him win.”

While Russell lived for sports, mom and dad wanted to make sure he took school seriously too.

“I was the math/science support. My husband was the English and history support person and we just made sure they got their school work done.”

“He liked the socialization part,” she says with a slight hesitation.

Tammy says around seventh grade he began to “leverage his friends” to improve his academics.

He knew there were other boys in his class who had better grades and seemed “smarter.” He also knew he was a very good athlete. Russell helped them by practicing whatever sport they were trying to improve their skills in, while they assisted him in developing better study habits and understanding his homework.

When Wilson was in high school, something happened that prepared him for his rookie year as a Seahawk.

“He was in 10th grade and there was an 11th grader who was also going for quarterback who was 6’5″ and what the coach decided to do that year was have a competition, just like Coach Carroll did, and let their play on the field make the decision about starting quarterback,” says Wilson’s mom.

Russell won then, and of course he won the quarterback battle with Matt Flynn to start for the Seahawks this season, even to his mom’s surprise.

“I always knew he would get a start as a quarterback, but I have to be honest and say I never dreamed it would be this year,” she says. “I never dreamed how well the team would do.”

The biggest influences in Wilson’s life – his faith and his father.

Wilson’s father, Harrison Wilson III, attended Dartmouth and became a lawyer. He was also athletic and went to training camp as a receiver with the San Diego Chargers in 1980.

Although he died in 2010, Tammy says her husband is responsible for Wilson’s work ethic and discipline.

He would often prepare his sons, not only for sports, but for how they would talk about sports as professional athletes. Russell and his brother Harry even had to practice what they’d say if they someday won the Super Bowl.

“My husband always told the boys if there’s any kind of business situation, wear a suit and wear a tie,” she says. “That’s why Russell is very adamant about taking a shower and being well groomed after a game before he does his press conference.”

Tammy doesn’t know what Russell’s Super Bowl speech was as a teenager, but she thinks we’ll all find out this year.

“Of course he’ll be in the Super Bowl,” she laughs, “I definitely think so.”

Lake Washington Windows & Doors SPONSORED — Fiberglass windows are an excellent choice for window replacement due to their fundamental strength and durability. There is no other type of window that lasts as long as fiberglass; so why go with anything else? Fiberglass windows are 8x stronger than vinyl, lower maintenance than wood, more thermally […]
Close
The childhood, family, and faith behind Seahawk Russell Wilson