Sugary drink tax earns the city $4 million, but is it working? 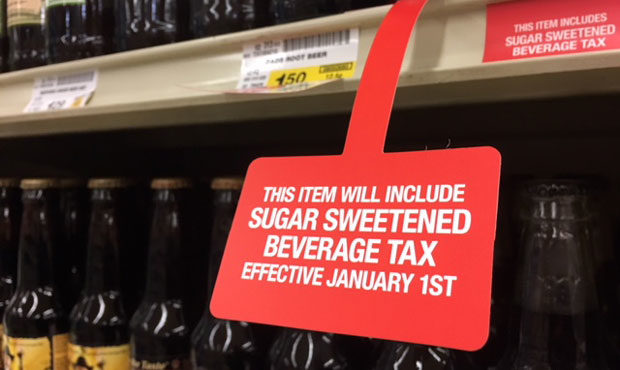 The little tags at grocery stores informing customers of higher soda prices are ubiquitous, as are the looks of irritation every time somebody is reminded of Seattle’s sugary drink tax.

“We need to toot the city’s horn for a change,” said KIRO Radio’s Tom Tangney. “Because they predicted it was going to raise about $14 million. The tax raised $4 million in its first quarter. So it’s pretty close, which doesn’t happen that often.”

RELATED: Why some sugary drinks are exempt from Seattle’s new sugar tax

The money will pay for healthy-food programs, community-college scholarships, administrative costs, and early-learning programs. Part of the revenue will be spent on studying the tax; how it impacts people’s behavior.

A University of Washington team will use the data to research sugary-beverage consumption in children from low-income families.

“Hopefully when they give them the results,” joked KIRO Radio’s John Curley. “The city doesn’t have to race and find another opposing study to prove something different.”

Proponents argued the sugary drink tax would discourage people from buying sugary drinks and redirect the funds to positive ends. Opponents like store owners and unionized beverage-industry workers suggested it would unfairly hurt low-income families. The measure could be seen as an elaborate loop of money because the revenue is slated for low-income families.

Does the sugary drink tax hurt the people?

“That’s called a transfer,” joked Curley. “Fifty-nine percent of those who consume sugary drinks are Hispanic or black. But it’s not about the color of the person’s skin, it has to do with education. If you only have high school education, you tend to drink one or two a day. So they’re taking the money from you now, running it through the bureaucracy, and then spitting it out through a couple of programs that may or may not benefit you.”

“Well,” countered Tom. “They’re designed to benefit you under the healthy food program’s idea. If it impacts those particular communities, it can help those communities if they raise the money.”

“Rich white people drink lattes, which are exempt (from this tax). We didn’t tax the rich white people, we taxed the poor … because they drink more unhealthy drinks, even though a latte has more sugar in it than some of those drinks.”

“I don’t understand that part,” agreed Tom. “Is there a dairy lobby in this town?”

Racial dynamics and radio bickering aside, the primary issue with the sugary drink tax seems to hedge on long-term health. UW researchers plan to follow up with the low-income kids in their study every few months.

“The thing with the University of Washington study that will be interesting is: Does it reduce obesity?” Curley wondered.

“Does the kid’s weight go down because they’re not drinking as much soda? They’re eating just as many fries and potato chips and having just as many burgers. So maybe they’ve gone from Coke to a Diet Coke. But most of their calorie intake is still from fat.”

There are a wide variety of treatments options available for men with prostate cancer. One of the most technologically advanced treatment options in the Pacific Northwest is Stereotactic Body Radiation Therapy using the CyberKnife platform at Swedish Medical Center.
Close
Sugary drink tax earns the city $4 million, but is it working?