Now Lyft is launching a bikeshare in Seattle Yet another bikeshare is expected to come to Seattle. While JUMP announced it is launching in town with the backing of Uber, the company’s competitor Lyft is also reportedly bringing a bikeshare into town. And it will bring the parent company behind the infamous Pronto with it.

According to Seattle Mayor Jenny Durkan’s office, the city is issuing bikeshare operating permits to three companies: JUMP which launched in Seattle this week; Lime, which has been in Seattle since July 2017; and Lyft.

“We’re excited about the possibility of bringing more mobility options to Seattleites to give them another affordable and convenient way to get around,” a Lyft spokesperson said.

Lyft announced its intention to get into the bikeshare business in July, shortly after the rideshare giant purchased the bikeshare company, Motivate. The company generally operates bikeshare systems in cities under different names: Citi Bike in New York, Ford GoBike in San Francisco, Divvy in Chicago, or BikeTown in Portland.

Motivate was also the parent company behind Seattle’s first bikeshare attempt, Pronto. That system was mired with problems from low ridership to financial struggles. Pronto launched in 2014, and shut down operations in 2017. The city kept Pronto afloat financially until completely buying it out, then shutting it down. 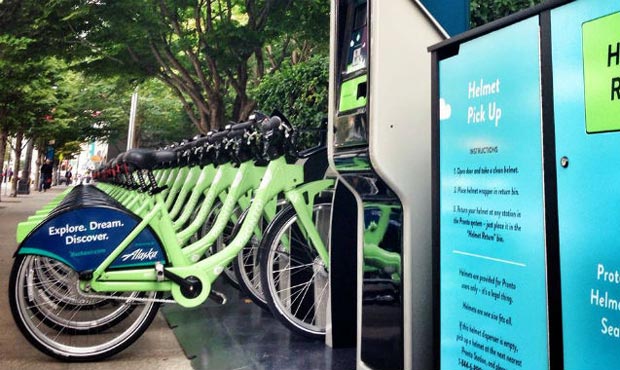 Pronto was a system based on renting bikes from stations. Customers had to return the bikes to another station when they were done. This is different than Lime or JUMP, which are free-floating bikes that can be left anywhere. There is no word yet on how Lyft’s bikeshare system will operate.

Under Seattle’s new bikeshare permit, each company will be allowed to have 6,666 bikes in town. They can add up to 20,000 by spring 2019. The three companies are paying for the permits, too. Together, they will pay around $1 million annually.

With JUMP and Lyft entering the Seattle market, they will replace two other bikeshares that Seattle lost over the past year in Spin and ofo. It will bring the city back up to three bikeshare companies in town.

“As public and private megaprojects squeeze Seattle’s streets, we must act urgently to increase mobility and give residents and visitors more options for getting around Seattle and to and from transit,” Mayor Durkan said. “As we enter this new era of tough traffic and this new phase of bike share in Seattle, we’ll be doing more to ensure bikes are parked in designated areas, and that access is more equitable across Seattle, especially for our neighbors with lower incomes in underserved communities. We’ll also continue building a city with fewer single-occupancy vehicles downtown, more access to reliable and affordable transit, and safer bike and pedestrian corridors.”