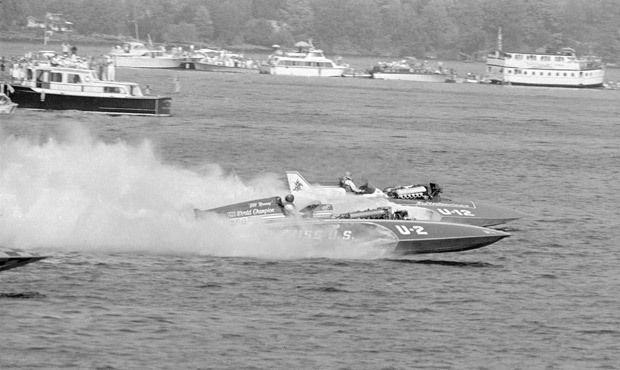 It’s a noisy summertime tradition and popular spectator sport here in Seattle and it has been for decades. But old-timers say that the new arrivals just don’t get it, that they don’t appreciate the heritage and the meaning of a contest that’s still near and dear to so many local hearts.

Of course, the “spectator sport” and “contest” of which I speak is the annual debating of the relevance of the Seafair hydroplane race.

Back in 1975, a Seattle Times editorial asked, “Are the hydroplanes passé?” In August 2003, a Seattle Times headline questioned, “Have we outgrown Seafair hydros?” For that 2003 article, a numbskull was quoted saying, “The hydro races have been losing relevance for a long time. Not to denigrate it, but people’s tastes change.”

We’ll come back to that numbskull in a minute. First, the reason for that 1975 editorial is worth taking another look at. That year, for the first time, Seattle’s annual thunderboat races were in real danger of not happening at all.

It was one year earlier, in 1974, that the hydro races were held in a new location. Seafair, the community organization with roots in Seattle’s post-war boom years and the city’s centennial celebration in 1951, moved the race from south of the I-90 bridge near Stan Sayres Memorial Park to what’s now Magnuson Park. Back then, the area was known as Sand Point and it had been a Navy base for decades.

In 1974, the city was in the process of taking over the old base from the Navy to turn it into a park. The move to Sand Point happened because Seafair had been losing money on the races for years and expenses were going up.

For all previous years of the race, from 1951 to 1973, there was no charge to watch the races at Stan Sayres. In 1974, Seafair wanted to charge admission to help cover their increasing costs. Sand Point, as a former Navy base, had a fence around it, which made it easier to control than the shore around Stan Sayres. Race fans got into Sand Point for $6 a carload.

The 1974 Seafair races weren’t exactly a disaster, but many spectators and hydro teams weren’t pleased. The course was shorter, so the boats couldn’t reach the high speeds they could at the old location, and some say it was windier and the water choppier. And since Sand Point was not yet a park &#8212 it was an old Navy airfield &#8212 it lacked the amenities of Stan Sayres, there were no trees and no shade, and the view for most of the spectators turned out to be not very good.

“It was a bad idea,” says legendary broadcaster, concert promoter and raconteur Pat O’Day of the move to Sand Point. O’Day, who did play-by-play for the hydros for decades, broadcast the races for KJR that year and he remembers that the place was called Sand Point for a reason.

The winner that controversial year was the Miss Pay n Pak, driven by Smiling George Henley of Eatonville.

As it came time to plan for the 1975 races, the Unlimited Hydroplane Commission refused to sanction the Sand Point location for a return engagement, saying that the course was too windy and not conducive to holding a good race. Then, Seafair said it couldn’t afford to hold the races at Stan Sayres if they couldn’t charge admission. It turned into a standoff.

The UHC threatened to bypass Seattle that season and sanction a hydro race in Dallas instead. It looked pretty grim for a while. But, at the last moment &#8212 just weeks before the race &#8212 the Seattle City Council stepped in and provided support in the form of an additional $20,000, boosting the city’s contribution to $56,000, and then two local hydro owners pledged $17,000 to help defray costs. The races went back to Stan Sayres where they’ve been held ever since.

And good thing, according to O’Day. He says that the original race location is, “memorable because of one thing: Stan Sayres pits is magic. It’s a beautiful race course, with Mount Rainier smiling down at everybody. That’s a magical, magical event.”

But the business of professional hydroplane racing has changed and many people say that the sport is not as popular as it once was in Seattle and other communities. As recently as the 1980s, local kids all over Puget Sound made their own miniature plywood hydroplanes and towed them behind their bicycles in neighborhood races. If that still happens, I personally haven’t seen it recently.

The truth is, hydroplanes had their biggest years in Seattle long before the Seahawks and the Mariners ever made it to the playoffs (and earned a spot in our professional sports-hearts and sucked up all those sponsor and ticket dollars). O’Day also says the current crop of turbo-powered boats lack the thrills and especially the sounds of the old piston-engine boats that dominated the sport from the 1950s through the 1970s, and he hopes that the industry will shift back to the more retro boats.

As for that numbskull quoted by The Seattle Times in 2003, he went on to redeem himself a bit later in that article by saying, “Seattle is at a stage where it is wrestling with being a small, out-of-the-way city vs. a big city connected to the rest of the world. As a result, there will always be debates and questions over whether Seafair is relevant or worth keeping.”

And yes, that numbskull was me, when I was deputy director of the Museum of History & Industry. Informed debates about what’s important to a city and region and how that can change over the years are critical conversations to have, officially and unofficially, if we want to live in this ever-changing place and have some say in choices that are made. Let’s keep Seattle’s present in dialog with its past as a means of preparing for the future.

But let’s give O’Day the final optimistic word on the hydros’ role in Seattle’s future, as he says it simply, and he says it best.

“Seafair was a nice community event, but the hydroplanes made it explode,” O’Day said. “The community needs the race and the sport needs the community.”

Seattle Public Schools just announced a three-year contract with a brand-new company to the Pacific Northwest to assist with their student transportation: Zum.
Close
It’s a local thing: hydroplanes echo through Seattle history