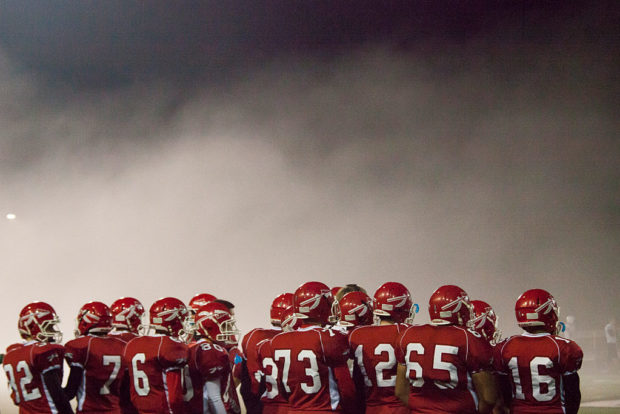 WA high schools hopeful for return of fall sports, even if it’s a modified season Marysville-Pilchuck High School football players are pictured on the sideline of a foggy playoff football game on October 31, 2014, in Marysville, Washington. (Photo by David Ryder/Getty Images)

While a return to in-person classes in Washington state this fall is still in question, parents and student athletes also want to know: Will there be school sports in the fall?

Mick Hoffman, executive director of the Washington Interscholastic Activities Association (WIAA), is hopeful for a fall sports return, but does not yet have a definitive answer.

“Right now, we are planning to start as normal,” Hoffman told KIRO Radio’s Gee & Ursula Show. “Our executive board made the decision about five weeks ago [with a] priority plan to start football on [August] 19th, and all other fall sports on the 24th of August. The fallback plan initially was to start after Labor Day, … then the third plan, contingency plan is to start after the new year and try to condense three seasons into those six months.”

Update: Following the executive board meeting on Tuesday, July 7, after Hoffman spoke to KIRO Radio, it was decided to delay the start of the fall season until Sept. 5, 2020, for football and Sept. 7 for all other fall sports.

The board is continuing to meet as they monitor the COVID-19 situation statewide, how counties are doing, and what the return of school may look like this fall. The WIAA oversees the athletics and fine arts programs of nearly 800 member high schools and middle or junior high schools, public and private, across the state.

“It could change, it’s a very fluid situation,” Hoffman said about the return plan.

The WIAA is working directly with the state Department of Health, the Governor’s Office, and the Office of the Superintendent of Public Instruction to develop a safe plan. After the recent rise in cases, it’s looking less hopeful for an on-time return, Hoffman says, but it’s not completely hopeless.

“It is looking less hopeful, I would say, than two weeks ago,” he said. “But again, we’re learning so much about this virus on an ongoing basis, how it impacts … young adults as opposed to older adults and vulnerable populations. So it’s really hard to say at this point. I would say a later start is becoming more likely.”

Any option is on the table, he added, including implementing different rules in different parts of the state according to the COVID-19 situation in each county.

“Our goal is to give students a chance to participate,” Hoffman said. “They have lost so much going back to the spring that any place we can provide a safe place for them to participate, we want to do. So does that mean we might not have formal large events, state tournaments, and have more local or regional where they’re able to participate? Absolutely. We would support that and help make that happen. It’s not ideal, but it’s sure better than what we did in March, April, and May.”

College football and the NCAA, as Gee pointed out, have been talking about the possibility of having athletes wear masks both during workouts and potentially under their helmets. Could high school sports see a similar practice?

“We’re working directly with the Department of Health on that very question,” Hoffman said. “What activities would need it? Which ones would not? Where would they recommend it? And they have not been able to determine that yet. … But again, we’re going rely on them because they’re working with the scientists.”

While Hoffman recognizes that wearing a mask has become political, he says he’ll do whatever it takes to make sure students get to play the sports they love.

“I’m trying to leave my personal beliefs and politics out of this and just pay attention to what is coming out from scientists,” he said. “And again, there’s not always an agreement, but at this point, the use of masks appears to be one of the greatest ways to stop the spread. … I don’t like wearing them, but I’m going to wear it because I would hate to have my personal preference keep kids from playing in the fall.”

For now, Hoffman does advise student athletes to be prepared for some return to sports, even if there’s modifications in the schedule or in how events are played.

“We definitely want students to continue to prepare physically because the worst thing that would happen is we’re able to play and they’re not physically ready, and they’re injured or worse,” he said.

“We just can’t give up hope,” he added. “We’ve got to hope and maybe we’re going to find out that this thing does lessen in severity, maybe a vaccine comes sooner than anticipated and we’re able to start. So we want people ready to go because we’re going to be ready to go when that time comes.”