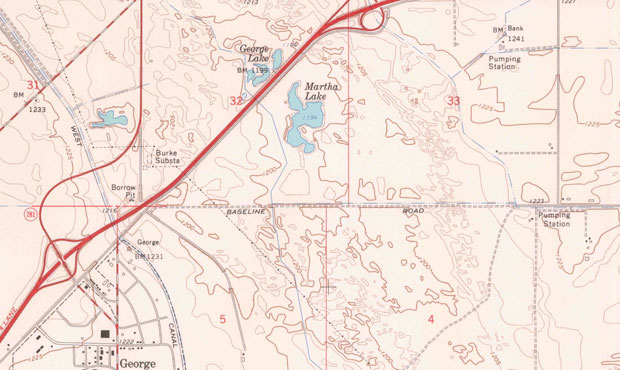 All Over The Map: The surprising number of Washington towns inspired by first names George, Washington is along I-90 in Grant County and is named in honor of the first name of the state's namesake; nearby is George Lake and Martha Lake. (USGS Archives)

Names for communities in Washington are inspired by many things – nods to obvious nearby geographic features, nostalgia for faraway hometowns of settlers, memorials to Indigenous leaders, remembrances for slain presidents, tributes to military figures and sometimes, of course, just the glory of the community’s settlers themselves.

The town of Marcus in Stevens County falls into this last category. Marcus was founded in the 1860s by W.V. Brown and Marcus Oppenheimer. The two men, and perhaps one of Oppenheimer’s brothers, took over barracks that had been abandoned by the British Boundary Commission, the military surveyors who spent about four years physically marking the 49th parallel, and opened a store there.

It’s unclear why, but those town founders chose Marcus Oppenheimer’s first name – rather than his last name, or either of W.V. Brown’s names – for the town’s name. And so, for a few decades, Marcus Oppenheimer lived in a town known by his first name. Eventually, the original townsite was flooded by the Grand Coulee Dam, so Marcus was moved a few miles north.

As it turns out, there are quite a few places in the Evergreen State that carry first names of founders or others somehow involved in settling or creating the community. These places fall into roughly three categories; below are some highlights.

These communities carry common first names, and the source of that first name is often readily identified by at least one of the handful of sources for place-name information in Washington.

Ethel in Lewis County: Once thought to be named for the wife of Postmaster-General William F. Vilas in 1886, but it turns out that her name was actually “Anna.” The true source of “Ethel” is something of a mystery.

George in Grant County: Named in the 1950s by town’s first mayor as a clever tribute to the first president and namesake of the Evergreen State. Still, as clever as it may be, there’s something about seeing the comma in “George, Washington” that just doesn’t look or feel right.

Roy in Pierce County: Named for the son of James McNaught who platted the townsite in the 1880s; original name was, yes, Muck.

Seattle in King County: Before European settlers arrived, names for Indigenous people in what’s now Western Washington didn’t follow given name/surname form. Thus, it’s possible that the City of Seattle – named for the famed Indigenous leader – might be considered a first-name town.

Winslow in Kitsap County: Bainbridge Island community named for Winslow Hall, one of the founders of Hall Brothers Marine Railway and Shipbuilding Company.

Zillah in Yakima County: The home of the Teapot Dome gas station was named for the daughter of Thomas Fletcher Oakes, president of the Northern Pacific Railway.

The names of these communities are based on first names, but also include a little something extra, usually in the form of a suffix.

Amanda Park in Grays Harbor County: Named for Amanda Southard, wife of Joseph J. Southard who opened a store there in 1926.

Carlsborg in Clallam County: Named by Carl J. Erickson while he was helping build a branch line of the Milwaukee Road Railway.

Elberton in Whitman County: Named after Elbert Wait after he died, at the behest of his father. More intriguingly, Washington State Place Names author James W. Phillips writes that Elberton was “once site of the world’s largest prune dryer.”

Lebam in Pacific County: Named for Mabel Pearl Goodell by her father, but spelled backward.

Lynnwood in Snohomish County: Named for Lynn Oburn, wife of one of the town’s early promoters, with sylvan-themed suffix added to highlight the area’s woodsiness.

Marysville in Snohomish County: One version of the many origin stories for Marysville are that it was named for Donner Party survivor Mary Murphy.

These place names only appear as if they’re based on first names.

Kent in King County: Named by Ezra Meeker after the Kent district in England, for the hops-growing shared by both places.

Ronald in Kittitas County: Name for Alexander Ronald, superintendent of the Northwest Improvement Company, operator of coalmines in the area.

These are by no means comprehensive lists of first-name towns in Washington. If there are others, please let me know via my contact information below.