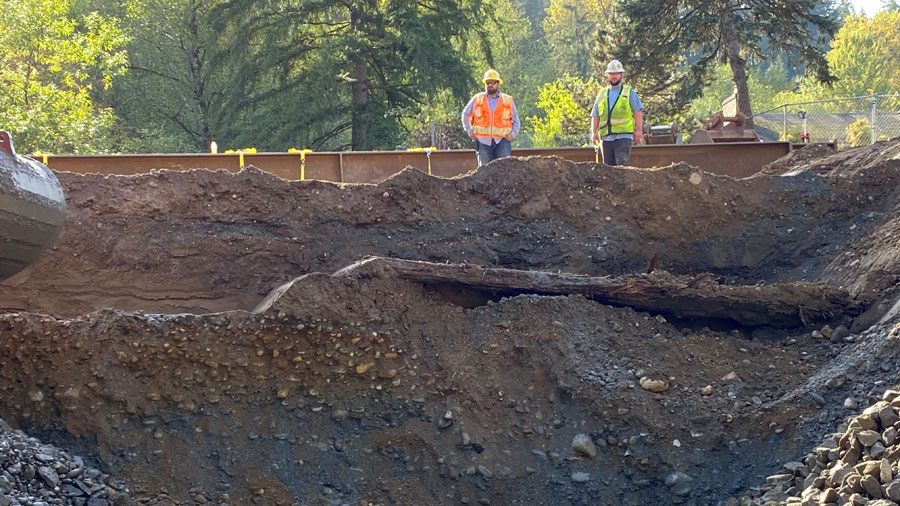 The Maple Valley Highway finally reopened to all traffic Wednesday after an unexpected discovery pushed a weekend culvert project out an extra three days. All we knew earlier this week was that workers found an old wooden road under State Route 169 that stopped the excavation work.

The Washington State Department of Transportation’s archaeologist, Jason Cooper, was called in to solve the mystery. And when Cooper’s phone rings over the weekend, someone on a construction project usually has found something interesting, and that’s exactly what happened.

Workers installing new culverts under the highway, north of Cedar Grove Road, uncovered a long section of wood planks. They weren’t sure if it was part of a bridge or a road, so they stopped work and made the call to Cooper.

“Their supervisor gave me a call and said, ‘hey, are you available to take a look at this,'” Cooper told KIRO Radio.

This is why he keeps his phone close during construction season.

Cooper did some quick research, including looking at the King County map vault online, to see what might have been there before the Maple Valley Highway was paved.

“I found a road survey map from 1929, which doesn’t show the wood plank, but within the plan it gave 8,100 linear feet of wooden plank boards,” he said. “That’s my smoking gun.”

But Cooper had to check it out in person to be sure.

“It was my job to evaluate it and make the determination if this was a significant piece of roadway,” he said.

It became clear after just an hour that it was nothing special. There were no other artifacts nearby, like cans, bottles, or any indication of a camping site.

“People thought it was a bridge, but there was no superstructure or no trestle buried underneath the fill,” Cooper said. “It was just a one-tier wooden plank road.”

Cooper was able to determine that it was from the original road built by King County in the 1920s from Renton to Maple Valley and eventually toward Mount Rainier. It became Primary State Highway #5 in 1937 when the state took the road over. It wasn’t paved until 1953. The entire road wasn’t made of wood, like the planks found over the weekend, but rather was a combination of packed dirt, gravel, and then this particular section along the Cedar River.

“It was built as a solution to this particular wet, soggy spot,” Cooper said.

We both chuckled over that because workers are still dealing with that wet, soggy spot nearly 100 years later. That section of SR 169 floods all the time, and last year the road was closed for five days because of flooding. That’s what the culvert project was aiming to fix.

I asked Cooper if he was disappointed that it wasn’t something spectacular.

“You always want the Ark of the Covenant,” Cooper joked. “When you’re dealt a plank road, you do what you can.”

Cooper’s wife asked him if the road was “Roman.” Now that would have been the discovery of the century.

With minimal travel time required and every activity under the sun, Anacortes is the perfect vacation spot for all ages.
Close
WSDOT archaeologist solves mystery of structure under Maple Valley Highway