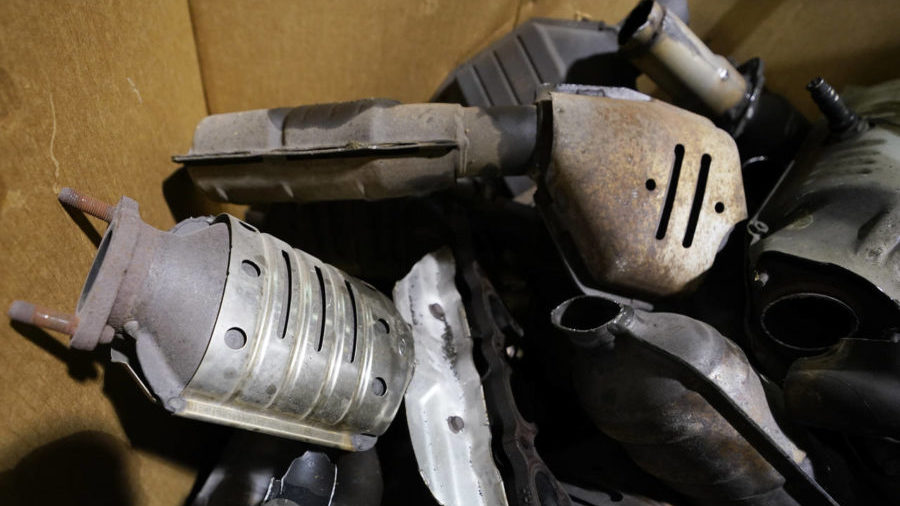 Catalytic converter thefts in Washington are out of control lately, but a California garage owner may have come up with a deterrent.

“As laid back as I am, I was thinking of slipping a spike strip under the car when I parked just to surprise the thieves,” KIRO Newsradio’s Dave Ross said.

Bill Todd, who owns a garage in Morro Bay, California, has another idea.

“We looked at the current devices that were on the market and, being a smog technician, one of the things I saw was it was pretty difficult to see the catalytic converter once we put the device on to do a smog inspection,” Todd explained. “We were supposed to be able to inspect it. So that was one of the issues I saw.”

“I came up with a design, a stainless steel device that essentially attaches in less than three minutes. I put a video on YouTube showing my son taping me doing it — simple as a 14 millimeter wrench and a three-quarter inch wrench,” he said.

It’s essentially a device that attaches over the bolts that people are using to steal the catalytic converters.

“Then there’s a plate further down that attaches to the pipe to prevent them from cutting through the pipe,” Todd added. “And both devices are held on with what they call ‘breakaway fasteners,’ so when you tighten the bolts, the end of the head snaps off so it makes it very difficult to remove.”

Todd did make it clear that this is not an anti-theft device, it’s a theft deterrent.

“You give any thief enough time, they’ll steal the car if they can,” he said. “… The thieves, if you’ve ever watched the videos online, they’re taking these things off in 20-30 seconds.”

The people who have bought the device already, Todd says, had to sign a disclaimer that acknowledges this device does not guarantee the car won’t be stolen.

“So you slow them down enough to make them think twice about going after your car?” Dave asked.

“Exactly,” Todd replied. “Since I put them on vehicles in this area, we haven’t had anybody steal one off a car that has a device on it. But in Seattle, I think that’s the Prius capital of the world, so I think that would be a really good test ground for my product up there.”

Snohomish Health District SPONSORED — Cheers to the parents and guardians who keep their kids safe and healthy. The dad who cooks a meal with something green in it, even though he’s tired and drive-thru burgers were tempting. The mom who calms down the little one who loudly and resolutely does NOT want to brush […]
Close
California garage owner designs catalytic converter theft deterrent