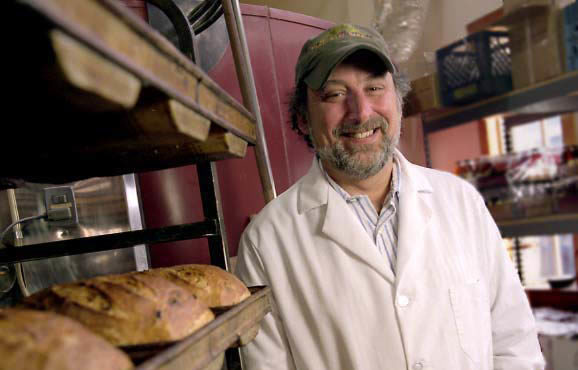 On July 17, 1897 the headline of a Seattle newspaper read: “Gold! Gold! Gold! Gold!” The Klondike Gold Rush put dollar signs in the eyes of Seattleites and San Franciscans, and about 70,000 prospectors made their way north to try and hit it rich. At least half of them bought supplies for their long, cold journey in Seattle, which christened the city as “Gateway to the Gold Fields” and literally put Seattle on the map.

Most of those prospectors relied on sourdough bread to keep them fed during that journey. Some carried precious sourdough starters in a pouch around their neck or slept with it in their sleeping bag at night to keep it warm. According to an article in Edible Seattle, crusty old prospectors who returned from the Yukon were even called Sourdoughs.

At Seattle’s Essential Baking Company headquarters, 16 million loaves of bread are baked every year. Most of them contain a chunk of the same century-old sourdough starter that fed prospectors during the gold rush.

Forty-year veteran baker George De Pasquale founded Essential Baking in 1994. He was preparing to open and lining up vendors.

“The guy who was selling me cleaning chemicals said, ‘You know, I have a starter that has been in my family a long time, maybe you want a sample, a little bit of it.’ I said sure. So he brought it back along with a family tree that he had drawn up with all the people he’s given the starter to. Apparently, the starter has been in the family since the Gold Rush since the late 1800s or whatever. It’s a super romantic story, the guy was the baker for the caravan from Seattle to Alaska and kept the starter in the bottom of his sleeping bag. It was his great grandpa or something like that. Completely unverifiable story but very romantic.”

Let’s explain what a sourdough starter is.

“It’s a natural yeast culture, is a simplistic way of describing it. So instead of having the little packets of dried out yeast that you’re used to, that you add to the dough to make it rise, we have a continuing culture of microbes. Some of it is yeast, some of it is lactobacilli. It’s this whole colony of microbes that we are cultivating and taking care of and creating an environment for them to live happy little lives before we throw them in the oven and kill them all.”

Just like other living things, a starter needs food and water to survive, and it must stay under 140 degrees. So it takes maintenance and fairly constant care to keep one alive.

“So we take a little bit of that culture and add a lot more water and a lot more flour to give a new, fresh environment for those microbes to live in.”

In addition to the starter that is fed and replenished daily at the bakery, De Pasquale keeps some of the mother in the fridge, just in case of emergency, and he keeps a chunk at home for extra insurance.

He says sourdough is just as much a part of Northwest history as it is San Francisco’s, the city most famous for the tangy, crusty bread. But using a starter, as opposed to dry yeast, is the original way the first breads were made thousands of years ago.

The Encyclopedia of Food Microbiology says: “One of the oldest sourdough breads dates from 3,700 BCE and was excavated in Switzerland.”

“The first archaeological discovery of bread that was uncovered was in Ethiopia, something similar to what I imagine injera is now. And that whole story is how we discovered bread. For many, many years people were grinding grains and mixing them with water and baking them on hot surfaces, you know, flatbreads. The idea was at some point, some baker, somewhere, left the batter out too long and it started bubbling and said, well, I’ll just bake it anyway and see what happens. Instead of flat pancakes, you get nice fluffy pancakes. So he said, okay, that’s pretty cool, so maybe as he noticed it was starting to die he put more flour in there and see what happened. All really intuitive, really symbiotic, you know. And that was literally ten thousand years ago.”

Using sourdough starter as opposed to dry yeast is what gives sourdough bread its delicious tang and satisfying chew.

“With sourdough, the flavors are much more complex,” said De Pasquale. “And that’s the real reason I’m so married to this process; the subtle complexities of the flavor.”

Well, there is one other reason.

“The history is super important to me, actually. I love being a part of that stream of bakers from 8,000 to 10,000 years ago to now and beyond. That part of it is fun. I have no way of knowing what happened to that starter in the 150 years or so that it was alive so I’m sure it was used and abused and cared for and discarded. So it was fun to kind of get it back and at least my part of it is robust and healthy.”

As I watched the dough get mixed and formed into loaves in the bakery, I realized I might be looking at the oldest living artifact in Seattle history.

According to the Centers for Disease Control and Prevention, men in the United States, on average, die five years earlier than women.
Close
The oldest living artifact in Seattle might be in a local bakery